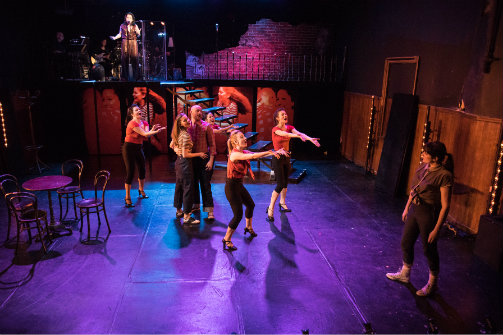 Dee Roscioli and the ensemble of Rock and Roll Refugee. Photo by Russ Rowland.

Before earning notoriety as the lead singer of pioneering women’s rock band Goldie and the Gingerbreads, the force behind CBGB Records, and the world’s first independent female music producer, Genya Ravan, like countless post-WWII immigrants, struggled to transcend her past and find her voice in a challenging new land. Incorporating Ravan’s original songs with stories from her acclaimed memoir, Rock and Roll Refugee chronicles Ravan’s early life in the tenements of New York’s Lower East Side, following her rise from pain and obscurity to success and self-empowerment.

Rock and Roll Refugee begins where one chapter of Ravan’s story ends, as the then-named Genyusha Zelkovicz and her family flee Nazi-occupied Poland aboard a rattling freight train, cross through Ellis Island, and settle in a tiny Rivington Street apartment. Within this landscape, the show’s heroine, now known as “Goldie” (Dee Roscioli), grows from a spunky seven-year-old to a headstrong teenager, nursing a burgeoning love of rock music and a fierce determination to escape her surroundings. Writer-director Chris Henry takes us through Goldie’s quest for autonomy, pulling no punches in depicting the events which marked Ravan’s formative years and shaped her creative voice. We observe in detail the poverty, familial pressure, and sexual abuse of Ravan’s childhood, her adolescent forays into fifties-era rock-and-roll counterculture, her stint as a topless “cheesecake girl” model, and her flight from an unhappy arranged marriage. As in Ravan’s life, music functions as thematic link and saving grace, with autobiographical songs and a spirited ensemble carrying us through the story’s progression and vocalizing Ravan’s response to her complex circumstances. Likewise, Matthew Haber’s video projections blend perfectly with Cheyenne Sykes’ and Alex Petersen’s stripped-down sets, creating with minimal elements the war-torn Europe from which Ravan fled, the gritty neighborhoods in which she came of age, and the nascent rock scene through which she would ultimately thrive.

The tension between Ravan’s tragic past, uncertain present, and hopeful future runs throughout, and is represented by three separate but concurrent versions of Ravan, each occupying a different territory onstage. As the maturing child-to-teen Goldie, Roscioli inhabits the main playing area and shapes the brunt of the show’s action. Singing with a live band atop an upstage platform, an older, rockstar Genya (Katrina Rose Dideriksen) wails Ravan’s lyrics while swigging Jameson and brooding on the memories beneath her. Meanwhile, the folk-song-humming Genyusha (played by child actor Imogen Williams), traipses the set’s borders as a reminder of Ravan’s lost innocence and the world she and her family left behind.

The show ends on as transitional a note as it starts, with Goldie’s impromptu solo performance in an underground club setting the stage for her revolutionary music career. In a powerful display of healing and self-actualization, Ravan’s three selves join on the platform to sing the show’s closing number as the projection screens light up with images of her future successes. This collective finding-of-voice proves a fitting conclusion to Ravan’s story, and we share in her triumph after witnessing the hard road that led her there. Simultaneously a classic underdog story and a strikingly specific tale of one woman’s rise to fame, Rock and Roll Refugee traverses the liminal spaces of memory and identity, epitomizing art’s potential to bridge this gap and lead us to a brighter future.

(Rock & Roll Refugee plays at Royal Family Performing Arts Space through February 16, 2016. Remaining performances are Sundays and Mondays at 6:30; and Tuesdays, Thursdays, Fridays, and Saturdays at 5:30. Tickets are $18 and are available at royalfamilyproductions.org or by calling 866-811-4111.)