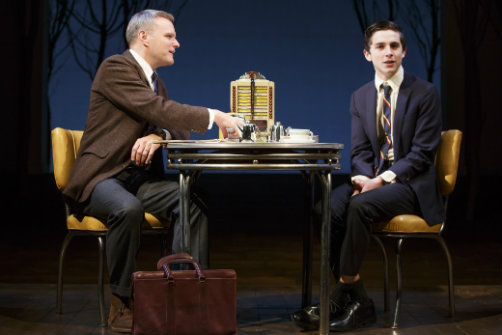 BOTTOM LINE: An intelligent and provocative coming-of-age story set against the background of religious and academic isolation.

In the production’s opening moments, beautifully constructed by scenic designer Santo Loquasto, we are introduced to a world ill-equipped to deal with a young man whose mind bursts at the seams with thoughts exciting, inquisitive, and dangerous in nature. Inviting us to begin our travel back in time to his teenage years, Jim Quinn (Timothée Chalamet) brings us to a diner, where Jim is accepted to the school on scholarship by its headmaster, Carl Schmitt (Chris McGarry). Jim is a young man from the Bronx and the scholarship Carl offers is a way to rise above Jim’s humble means.

From the minute we are first introduced to Jim, Chalamet commands the stage with incredible force for an actor his age. His mannerisms are well developed, and it’s obvious that Chalamet has spent a generous amount of time in crafting a young teenage man coursing with energy difficult to express and control. Deeply influenced by the authors and poets he worships in his literature classes, Jim is a budding philosopher. In a conversation between Carl Schmitt (Jim’s theology teacher as well as the school’s headmaster) and Jim’s literature teacher Alan Hoffman (Robert Sean Leonard), Carl calls Jim “the most interesting mess”—continuing on to concede that while Jim is brilliant and incredibly promising, his violent outbursts, hedonistic ways, and favorance for rhetoric over religion is concerning and potentially damning.

The production continues on through Jim’s junior and senior years, mostly highlighted by moments of his fall from grace. Jim often feels lost in his own body, almost as if he isn’t in control of his destiny. This is a central idea in the piece that surfaces multiple times. In an Advanced Placement English class, Jim has a personal and poignant conversation with his teacher, and Carl’s wife, Louise Schmitt (Annika Boras). Jim presents the idea of there being a lack of choice in life—that we simply are who we’re born to be, and that our lives are dictated without free will. It’s in their conversation that we can see Louise’s respect for Jim’s intelligence, as well as a deep compassion that we learn later in the piece stems from prior tragedy in her life.

Boras’s moments on stage aren’t abundant, but are incredibly memorable. There’s a scene in the show where Louise and Carl discuss troubled Jim over dinner that is one of the show’s many highlights. In that scene, and many others, Boras’s portrayal of Louise is a beautiful contradiction to the time period. On one hand she is the dutiful wife of the 1960s—putting the finishing touches on the meal she has ready for her husband’s return home from work, wearing her perfect housewife dress, paying close attention to properly serving tea to her guests, and primping her appearance whenever possible. Then on the other hand she is strong, direct, and incredibly independent. After learning that Jim has gotten himself into trouble by stealing another student’s records, Louise goes behind her husband’s back and returns the records for Jim to the faculty lounge when no one is around.

With less than a couple of weeks before graduation, Jim is caught intoxicated by the school nurse, and is confronted by Carl in one of the show’s most intense and well-crafted encounters. In both writing and directing Prodigal Son, Shanley is able to construct dialogue between his characters that is not only incredibly intelligent, but delivered in such a way that it engages the audience and is never once questioned for its authenticity in execution. There are no extraneous moments of babble and every word is delivered with purpose. An especially well-performed scene occurs when Jim accuses Carl of being like every other teacher who just teaches what’s on the syllabus. He spits at Carl, “You teach Religion, but I don’t know anything about religion from you. I’ve never seen your soul. I’ve never met your God.”

Without giving away the ending, Prodigal Son reaches an incredibly satisfying conclusion. Characters are redeemed, concrete facts and convictions are thrown on their heads, and audience members like myself walk out of the theatre rejuvenated and eager to question their own beliefs. If the purpose of art is to make you think and re-examine the way in which you live your life, then Prodigal Son passes with top marks.

(Prodigal Son plays at New York City Center, 131 West 55th Street, through March 27, 2016. The running time is 95 minutes with no intermission. Performances are Tuesdays at 7, Wednesdays at 2 and 7, Thursdays and Fridays at 8, Saturdays at 2 and 8, and Sundays at 2. All tickets are $90. To purchase tickets, visit nycitycenter.org, or call 212-581-1212. For more information visit ManhattanTheatreClub.com.)