Off Off Broadway, Solo Show
Runs through 11.13.16
The Players Theatre, 115 Macdougal Street 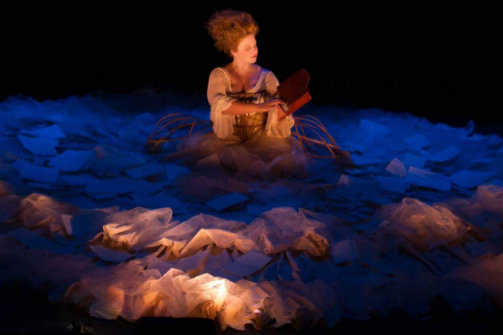 Jody Christopherson in The Other Mozart. Photo by Michael Niederman.

BOTTOM LINE: Thought-provoking and richly expressive, The Other Mozart tells the story of Wolfgang Amadeus Mozart’s talented but forgotten sister.

History, to paraphrase The Other Mozart’s curtain speech, consists as much of the stories we ignore as those we tell; depending on a given era’s priorities and power structures, many a worthy tale may go unregarded. Based on the life of Maria Anna “Nannerl” Mozart, the famed composer’s talented but ignored older sister, Silvia Milo’s captivating one-woman show plucks one such story from history’s silence. Returning to the Players Theater after last year’s critically-acclaimed run, The Other Mozart invites us to question the nature of fame and consider whose stories we choose to preserve.

Told in retrospect by Nannerl herself (Jody Christopherson, alternating in performances with Milo, Samantha Hoefer, and Daniela Galli), The Other Mozart follows its heroine’s coming-of-age amidst the grandeur, class struggles, and social constraints of eighteenth-century Europe. Surrounded by and enthralled with music from an early age, the prodigious Nannerl goes from hammering out tea-set melodies to harpsichord lessons with her father Leopold. When little brother Wolfgang, demanding to learn alongside Nannerl, shows a similar virtuosity, Leopold tours his talented children around the continent, hoping to find a wealthy patron to support their futures. Nannerl’s childhood takes us through a Europe marked by aristocratic splendor, rampant disease, and confusing double standards about women’s education, capabilities, and place in society. Upon reaching marriageable age, Nannerl’s freedom quickly evaporates as her mother’s efforts to groom her for a husband force her into a life of stultifying domesticity.

Encouraged by her brother’s letters, Nannerl perseveres, composing in secret and witnessing from afar Wolfgang’s tumultuous career. Though her work was lost to history and her own aspirations never realized, Nannerl’s story remains through the family letters on which The Other Mozart is based, her correspondence revealing the brilliant, passionate woman she was. Christopherson is by turns commanding, charming, and childlike in the role, embodying Nannerl’s search for identity, frustration with the rules she must obey, and deep-seated love for her family and her art. Milo’s thoughtful script empathizes as much with the Mozart family as with Nannerl herself; in their quest for a better life, Leopold and Wolfgang are just as bound by the era’s brutal class dynamics, and no less subject to their pressures and whims.

Equal parts costume, set, and visual metaphor, Magdalena Dabrowska and Miodrag Guberinic’s elaborate period dress functions as the show’s stylistic centerpiece. Its white circular fabric covers most of the stage, forming the playing area through which Nannerl moves. The story is literally housed within its folds, as Nannerl reaches within the layered skirts to produce fans, music boxes, and countless letters. The pivotal moment of Nannerl’s marriage is symbolized as she wrenches herself into the dress’s wrought-iron corset and remains locked in for the remainder of the performance.

The show’s other design elements similarly immerse us in the world it creates. Nathan Davis and Phyllis Chen’s delicately percussive soundscapes mimic toy pianos, ticking clocks, and clinking cups, while Wolfgang and Leopold Mozart’s music, and the compositions of Nannerl’s idol and contemporary Marianna Martines, underscore the dizzying peaks and valleys of an artistic career. Milo even incorporates our sense of smell, as dustings of lavender powder evoke Vienna in the springtime.

Powerful and evocative in any context, this revival of The Other Mozart could not come at a more fitting time. As women’s voices simultaneously gain prominence and face threat in our society, it becomes all the more crucial to consider which version of history we receive, and pay attention to perspectives once diminished or marginalized. By bringing Nannerl’s tale onstage, Milo’s show is both a victory for the woman herself and a testament to all stories left untold.

The Other Mozart is written by Sylvia Milo and directed by Isaac Byrne. Music and Sound Design by Nathan Davis and Phyllis Chen, with additional music by Marianna Martine and Leopold and W.A. Mozart. Lighting Design by Joshua Rose. Costume Design by Magdalena Dabrowska and Miodrag Guberinic; Dress Concept by Anna Sroka. Hair Design by Courtney Bednarowski. Movement Direction by Janice Orlandi.