By Mac Wellman; Directed by Meghan Finn
Music by Alaina Ferris
Produced by The Tank and 3-Legged Dog

Off Off Broadway, Play With Music
Runs through 1.23.16
Connelly Theater, 220 East 4th Street 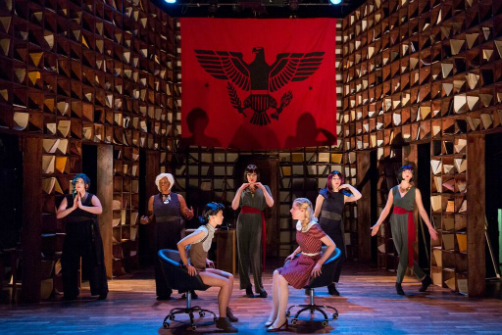 BOTTOM LINE: This play with music pokes at war and power through the lens of Nazi Germany and two confused dogs.

It's obviously been quite some time since WWII, but representations of Hitler can still make me squirm. The Offending Gesture, which jumps head first into Nazi Germany with a fictionalization of a supposedly true account, plays into its experimental tone with a smart satire that's uncomfortable in all the right ways.

A Finnish man has taught his dog Jackie (Kristine Haruna Lee) to give the Nazi party salute upon a "Heil Hitler" command. This news angers the Third Reich, as to them it's clearly a gesture of mockery. Hitler (Layla Khoshnoudi) unsuccessfully tries to teach his own dog Blondi (Abby Rosebrock) to salute. As the German leadership decides what vengeful action to take, Jackie and Blondie form a friendship and concoct their own plan to save Finland from retaliation, which involves shifting focus to Iraq (cue modern familiarity).

The rest of the cast comprises the German and Finnish government leaders who double as moon cats, the musical creatures who tempt and tease Jackie and Blondi. With a seductive score by Alaina Ferris, the moon cats sing and dance throughout the show—often playing instruments too—like a sexy Greek chorus hell bent on mysterious entertainment. It's enticing for the audience, and also for the dogs who are just trying to understand the world around them.

Mac Wellman is a pioneer of contemporary experimental theatre and the current director of the acclaimed Brooklyn College playwriting program (Annie Baker is just one of many notable graduates). Here, Wellman presents a look at foreign policy (and a thoughtful dual meaning of what it means to be offended), by skewering a gesture (and ideology) at the top of the things-that-are-most-offensive list. It's a smart script that maintains a dark sensibility while indulging in some highly entertaining caricatures.

Director Meghan Finn manages the tone perfectly, with a theatrical flair including footlights and a red velvet curtain. There's an overwhelming seriousness to the performances with a subtle wink to the audience. Khoshnoudi's Hitler is a delicious cross between Dr. Evil and Eva Peron. Lee and Rosebrock, as the dogs, are sympathetically canine-ish without indulging in the joke. Most excitingly, the cast is comprised of all women, which adds another fractured take to the historical tale.

The Offending Gesture is a tightly produced play with an appropriately eerie design. Christopher and Justin Swader's two-tiered set shows an expansive library well-suited to a political powerhouse with ill intentions. Emily Blumenauer's costumes are equally savvy: innocent frocks for the dogs and tight-fitting jumpsuits for the mooncats. Sound design by Eric Sluyter and lighting design by Brian Aldous also add an immense amount of moodiness, setting up the contradictory world.

Perhaps the most exciting thing about this play is the subtlety with which it delivers its point. To be sure, the choices here are large, from the performances to the overall theatricality. But it doesn't hammer home an agenda about politics or power. Instead, it's a story about trying to understand a changing world, from the perspective of observant but rather dense animals. We're all animals, anyway, when it comes to foreign policy.

(The Offending Gesture plays at the Connelly Theater, 220 East 4th Street, through January 23, 2016. Performances are Wednesdays through Fridays at 3; Saturdays at 3 and 8; and Sundays at 3. There are some additional performances, check brownpapertickets.com for full schedule. Tickets are $25 ($15 for students) and are available at brownpapertickets.com. For more show information visit thetanknyc.org.)

The Offending Gesture is written by Mac Wellman and directed by Meghan Finn. Music is by Alaina Ferris. Lighting design is by Brian Aldous. Set design is by Christopher and Justin Swader. Sound design is by Eric Slluyter. Choreography is by Laura Diffenderfer. Costume design is by Emily Blumenauer. Stage manager is Katherine Shelton. Production Manager is Liz Nielsen.