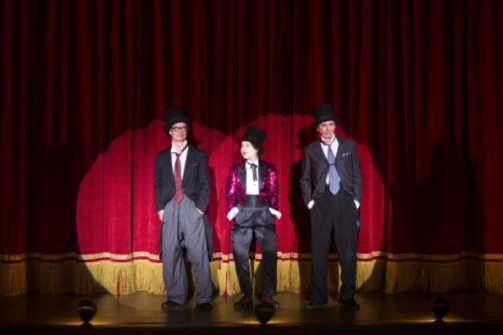 Old Hats had a very successful run at the Signature Theatre in 2013 so it's no wonder they brought the show back for another go. It's also fortunate that they did, because there is nothing like it playing anywhere else in the city, and there hasn't been in a while. This is a show that will delight countless audiences from every demographic.

David Shiner and Bill Irwin, prominent actors with impressive careers, have their roots in clowning. In Old Hats, which the also wrote, they perform a variety of skits (of varying lengths but no longer than 10 or so minutes each). They cover topics including a political debate, a magic show, and the plight of a lonely hobo. With significant diversity, the production feels at times like a variety show, and Shiner and Irwin's malleability makes it seem like there are more than just two actors playing all of these roles.

Interspersing these skits is live music by songstress Shaina Taub and her tremendous band of appropriate-hatted musicians. Taub's songs are sincere, thought-provoking, and brimming with optimism, all the while being appropriately self-aware and very honest.The lyrics are center stage in her work, and her writing is witty and insightful. The music mixes perfectly with the on-stage comedy and the whole show becomes a reminder to not take life too seriously.

Taub's presence also sets the mood of the room, making the audience feel like they are at a club, instead of in an anonymous theater. There is a wonderful inclusion in this; when Taub banters with Irwin and Shiner, it feels special to observe their interactions. Audience participation is a big part of this show, but fear not introverts, most audience members are not approached. Although the house lights do come up a fair amount, you are probably out of harm's way if you are not sitting in the front row (and don't look like you want to star in an old-timey Western).

Old Hats is an anomaly in contemporary theater: it emphases physical comedy and a playfulness that feels like it is from a different era. There are some current suggestions, to be sure, but for the most part it evokes timeless entertainment. For me personally, I couldn't help but reflect on the history of clowning, from commedia dell'arte to vaudeville. How rare to see those traits on stage today for the sake of themselves, and not part of some larger production or used to convey a broader objective. Tina Landau's direction massages the skits into a truly special evening, and with Taub's musical offerings, the event feels like a necessary reminder of the importance of entertainment. This is a production that's suitable for all ages. Although it gets bawdy at times, its heart is with anyone and everyone who likes to laugh.

Old Hats is created and performed by Bill Irwin and David Shiner and directed by Tina Landau. Set and costume design is by G.W. Mercier. Lighting Design is by Scott Zielinski. Sound Design is by John Gromada. David H. Lurie is the production stage manager.