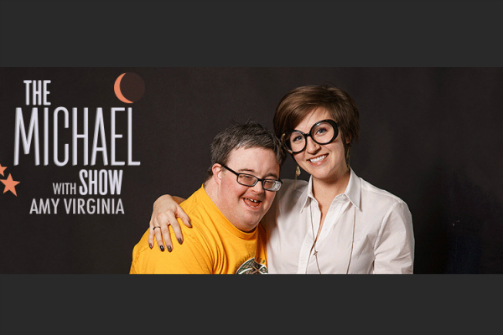 BOTTOM LINE: Little sister Amy Virginia Buchanan offers a heart-rending look at growing up in the shadow of an older brother with Down Syndrome.

There are no sets in Amy Virginia Buchanan’s The Michael Show. The stage contains just one stool and one chair so that when Buchanan walks out to perform her beautifully-written and deeply-emotional monologue about her relationship with an older brother who has Down Syndrome, all eyes are on her. This is as it should be. Buchanan’s candor and connection to her 34-year-old sibling are immediately evident but this is not a sugar-coated, feel-good, look at how one family surmounts disability play. Instead, the play addresses the ways each member of the household is positively and negatively impacted by Michael's quirks and limitations.

For starters, Michael “can be a dick,” Buchanan admits. “He can patronize me better than anyone else…He reacts. He orders food that he chokes on and spits up,” making it hard for the family to eat out. What’s more, “sometimes I hold his hand and it’s wet and I don’t know why.” He can also be mean-bordering-on-cruel to his mom, and since he still lives in his parents' Fargo, North Dakota home, he reduces her to tears with horrifying regularity. Still, when he is sick—a frequent occurrence—Buchanan confesses that it’s like a piece of her heart “is walking around outside of my body.”

She worries about him constantly, albeit from afar, and talks to him by phone at least once a day, but it’s not all doom, gloom, and misery. Michael can be as funny and sweet as he can be difficult, Buchanan reports. He’s also far more conscious of interpersonal dynamics than people expect. When brother Peter got married, for example, Buchanan explains that her heart fractured to hear Michael wonder if he will ever find romance. “Where’s my girlfriend?” Michael pointedly inquired.

Buchanan’s love for Michael—indeed, her love for everyone in her nuclear family—is genuine and her delivery conveys passion and compassion in nearly-equal measure. Nonetheless, she questions whether she is exploiting Michael by making him the subject of a performance in which she, and not he, is the star. It’s a good question, and one without a clear-cut answer. At the same time, Buchanan reports that “Michael fucking loves that a show about him is happening right now. ”

Buchanan’s grin widens as she offers this tidbit. She offers humorous anecdotes about Michael’s antics throughout the play, expertly weaving pathos with levity. It’s a potent and successful mix. At times, however, she is reduced to tears as she talks about Michael’s inevitable death and what his absence will mean for those who outlive him. But there’s anger, too, at judgmental outsiders who sneer at Michael when he is having a public meltdown, or, worse, look at him with pity, shame, or gratitude that he’s not their child or brother.

“Michael has had a good life.” Buchanan says in closing. “He’s been to prom eight times, the last one with a date. He’s traveled throughout the US, had one dog, two cats, several guinea pigs, and seen Good Morning America twice.“ He’s been to a Broadway show, been on the television news, and even starred in a commercial in his hometown. Still, like everyone else, Michael wants more. And that’s the point of The Michael Show. Despite physical features and intellectual shortfalls that distinguish him from those without Down Syndrome, Michael wants to grab as many life experiences as he can, and just like his younger sister and brother, he has no intention of giving up or backing down until he’s sated.