My Old Man (And Other Stories)

Written and Directed by Jess Barbagallo 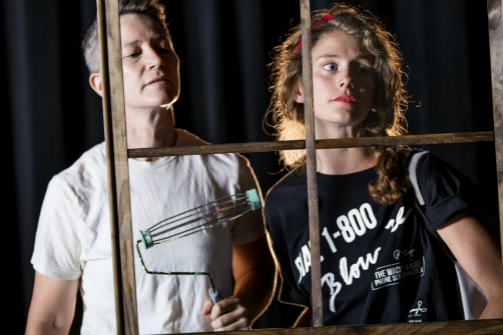 Drae Campbell and Gabriella Rhodeen in My Old Man (And Other Stories). Photo by Peter Yesley.

BOTTOM LINE: Jess Barbagallo’s unapologetic theatrical collage is a live storybook about humans whose paths intertwine into a surreal picture of love and loss.

Jess Barbagallo’s My Old Man (And Other Stories) is set against the backdrop of a working-class town where artists move to flourish or die, and where can be found a collection of distinct characters: a shrewd nurse, uncertain academics, and a fish named Boner, among others. The piece resembles a volume of collected stories: each individual segment can stand alone as a mini play, yet together they make a theatrical montage of love and loss.

The evening begins with Professor Fletcher Kitane (T. Thompson) addressing the audience as if in a college lecture hall, discussing the significance of individual experiences of stories. Kitane asks the audience about their familiarity with It’s A Wonderful Life, which leads to picking out Cara Movary (Gabriella Rhodeen), the next featured character. Cara relates the synopsis of It’s a Wonderful Life, followed by a personal memory stirred up by the film. And this is indeed Barbagallo's intention: to create an environment where individuals might partake in their own interpretations of shared experiences.

A few blocks and planks painted with bright colors transform the set into various shapes, and the next turns out to be a barbershop, where we find Barry (Drae Campbell) receiving the tragic news from neighbor Andrea (Emily Davis) that Barry's beloved pet fish Boner is dead. The performances of both Campbell and Davis are deliberately exaggerated, making the tone of this story wildly entertaining.

We then move to a waterfront plaza outside a hospital, where nurse Jess Bantili (Cecilia Gentili) takes her daily smoke break by a patch of grass, atop of which lies an old condom. The sexual tension between Bantili and Steven “Pixie” Werther (Aron Canter) escalates, juxtaposed against Bantili’s private communications with the elements, including that patch of grass, executed with a seemingly omnipresent voice-over.

The rest of the piece continues this theme of realistic scenarios played with a touch of surrealism, including when Thompson serves as the narrator of a story between Cara and her aunt Patty (Monica Wyche) in Patty’s basement. Or rather, Thompson plays this "story" as an actual character, both flirting with Cara but also addressing the audience directly, so that the fourth wall seems to become a breathing organism, like the elements that talk back to nurse Bantili.

Over time, we gradually discover the intricate relationship between the various characters and grow to identify with their problems. Barbagallo’s staging is simple yet effective: nothing on stage is unused, and Barbagallo's excellent use of the space makes the audience feel involved in the universe of these stories.

My Old Man also touches upon the various trials and tribulations faced by those who are artists, academics, and members of the trans community. Barbagallo's hilarious theatrical imagination creates a window into the queer and trans relationships present in these characters’ personal, professional, and romantic lives. Of course, there is also that talking horizon—people who enjoy magical realism but also prefer stories with roots in the immediate reality will surely get a kick out of this show.