Written and Directed by Athol Fugard 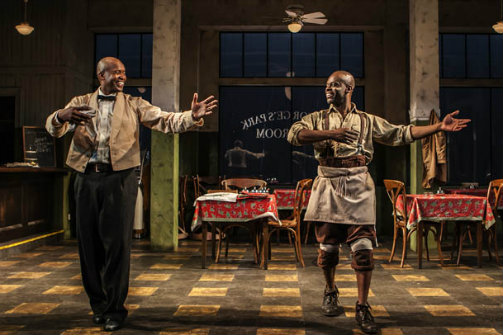 BOTTOM LINE: If only Athol Fugard could direct a production of his famous play “Master Harold”...and the boys. Oh wait, he does!

In one of his final acts as founder and artistic director, James Houghton requested that Signature's 2016-2017 season begin with Athol Fugard's celebrated play “Master Harold”...and the boys, set in South Africa during apartheid. While a 1950s period piece from a foreign land may seem irrelevant today, its powerful discussions and depictions of racism and social class greatly resonate in a society where just four months earlier the chant “Black Lives Matter!” rang through the city and shut down the very street of the Signature Theater.

Audience members young and old, black and white, are greeted by warm swing music as the lights come down and rain gently falls around Christopher H. Barreca's incredible set of St. George’s Park Tea Room. Two black servants, Willie (Sahr Ngaujah) and Sam (Leon Addison Brown), lightly poke fun at each other as they begin to set up the tea room for the day. As they joke, they practice ballroom dancing with varying levels of success while their boss's young son, a white schoolboy named Harold, or Hally (Noah Robbins), bikes up to join the jovial pair.

The great affection and familiarity of Willie, Sam, and Hally runs deep, enchanting the audience with their humor and rapport. Hally waxes poetic about his non-traditional upbringing with his black elders, however there is a clear undercurrent of deference paid toward young Hally due to his race and social class. The colonial system of masters and servants feels dated and uncomfortable, particularly during lectures from young Hally “educating” his two older servants.

Noah Robbins perfectly embodies the condescending Hally, holding his own against veteran actor Leon Addison Brown. Brown’s comic brilliance is perfectly matched by Sahr Ngaujah’s Willie, a longtime friend and sufferer of Sam’s mischievousness. Although the bulk of the dialogue falls to Robbins and Brown, Ngaujah is captivating in his silence, meticulously cleaning a floor on his hands and knees while his intelligent friend and young master ironically banters back and forth about education and social class.

Under Fugard’s masterful direction, the rising stakes and pain of the characters become palpable as Sam and Hally move closer and closer to the invisible Rubicon between black servants and white masters, from which neither can return. Particularly moving are scenes of ballroom dancing. Sam and Willie cling tightly to their elegant dream of movement throughout the world without fear of collision. Although their dreams of competitive ballroom dancing are mocked and derided by an angsty Hally, the two insist that “without the dream, we won’t know what we’re going for.” Theater fans would be sorry indeed if they were to miss out on this exquisite production of “Master Harold”...and the boys.