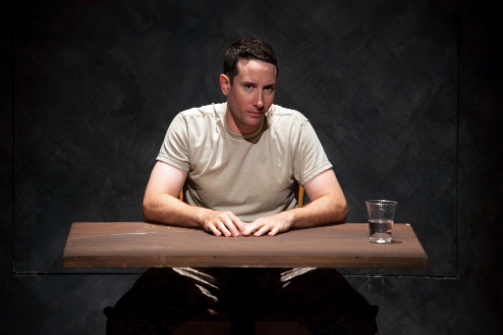 BOTTOM LINE: An exciting evening of new short plays that range from successfully thought-provoking to works in progress that are ready for the next step.

An evening of new work that has Neil LaBute’s name boldly attached to the title holds exciting potential. LaBute, a writer well versed in theatre, film and television and known for his bold contemporary work and biting dialogue, has worked with the Actors Studio of St. Louis for the past three seasons to produce the LaBute New Theater Festival. 59E59’s mounting of the festival marks its New York debut. In 59E59‘s intimate Theater C, six short plays make their New York premiers, directed by Milton Zoth and John Pierson.

Stand Up For Oneself by Lexi Wolfe and performed by Alicia Smith and Mark Ryan Anderson takes a moment to find its momentum. At a loud house party, Lucas, on the couch with a cane beside him, is clearly not enjoying himself while Lila is drawn to his mysteriously moody demeanor. Through cute guessing games and revealing personal information, they manage to make a connection that looks as though it will last at least until morning. Though British dialects are clumsily handled, Smith and Ryan create engaging chemistry with Wolfe’s endearing retelling of two misfits finding comfort in one another.

Two Irishmen Are Digging A Ditch by G.D. Kimble starts with the striking image of a bruised and bleeding nude male on the floor. From there the one-person scene (commanded by a fiercely committed Mark Ryan Anderson) can’t help but keep the audience's full attention with naked man and subject matter alone (he is in captivity awaiting an unfortunately predictable fate). Though the scene teeters on one note, Kimble undoubtedly keeps a lively pace. The second scene features a man (Justin Ivan Brown) literally digging a ditch while a larger and lazier man (Neil Magnuson) simply watches and converses with a Guinness in hand. Connecting the two scenes set in an Irish town takes some time. Though Kimble leaves plenty of room for interpretation, the piece is definitely thought-provoking. Similar to Stand Up For Oneself, I could have done without the imperfect accents.

In JJ Strong’s The Comeback Special, a couple on a cross country road trip (Alicia Smith and Michael Hogan) find themselves in Graceland; they have somehow dodged security and ended up in Elvis Presley’s bedroom. If their struggling road trip/relationship wasn’t conflict enough, it turns out Elvis (Neil Magnuson) is alive (or rather, he is stuck in some sort of vaguely described purgatory, unable to properly die) and it is their mission to help him successfully pass on to the next world. Confused? Me too. Though the campy short elicited some laughter, mine felt more forced than genuinely earned.

Coffee House, Greenwich Village by John Doble caught me off guard. What starts as a cliché first date takes a rather shocking turn towards psychological thriller. Jenny Smith and Justin Ivan Brown are two hopeful daters from the personal ads in the newspaper, with Mark Ryan Anderson portraying an overly annoying waiter (awkward and clumsy writing does not help Anderson here). The two daters are not only off-the-wall characters, but quickly become psychotic, playing mind games that are impossible for them or the audience to follow. The concept is an interesting idea, but unfortunately the fully realized production doesn't feel complete.

The crown jewel of the night, Neil LaBute’s Kandahar, ends the evening. Michael Hogan is a soldier returned home after his tour of duty. He's being questioned for what is revealed to be a chilling crime. His narrative is taken straight out to the audience, almost as though we are the ones questioning him. This interesting and unique position of power forces the audience to really investigate what is going on inside his head. LaBute’s new play is relevant (unfortunately so). It questions the character and ethical practices of soldiers, military authority, and how this system functions as a whole. Big questions, people. Though on the surface it is bare-bones simple, Kandahar is deeply and fascinatingly complicated.