Music and Lyrics by Stephen Sondheim; Book by Hugh Wheeler;
Directed and Choreographed by Judith Jarosz; Music Direction by Kevin A. Smith
Produced by Theater 2020

Off Off Broadway, Musical Revival
Runs through 3.8.16
The McKinney Chapel at the First Unitarian Society, 116 Pierrepont Street, Brooklyn Heights 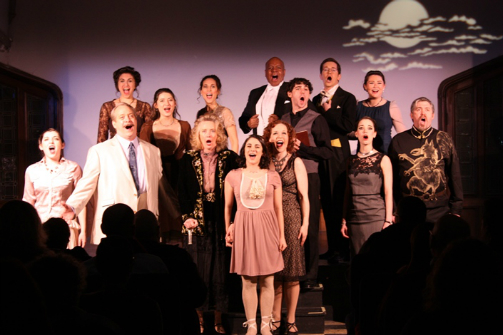 The cast of A Little Night Music. Photo by Judith Jarosz.

BOTTOM LINE: A minimalist production of the classic Stephen Sondheim musical driven by its vocal talent.

Based on the Ingmar Bergman film Smiles of a Summer Night, A Little Night Music is about the infidelities that occur as a result of mismatched romance. When middle-aged lawyer Fredrik Egerman (David Fuller) takes his 19 year-old virgin wife Anne (Chloe Holgate) to the theatre, he becomes reacquainted with an old flame, the famous actress Desiree Armfeldt (Lorinne Lampert). Desiree is having an affair with Count Carl-Magnus Malcolm (Adam A. Baritot) who is also unfaithful to his wife Charlotte (Jessica Rose Futran). When Count Malcolm learns that Egerman is sleeping with Desiree again, he grows insanely jealous. All scores are settled when everyone is invited—or shows up uninvited, in Count Malcolm’s case—to the home of Desiree’s mother, Madame Armfeldt (Becky Saunders) for a weekend in the country.

This production is simple, with the set consisting entirely of a bench, a chair and a table. Director/choreographer Judith Larosz spends her efforts showcasing the extraordinary voices at her disposal. It is especially appropriate that the production is performed in a beautiful church chapel where voices can resonate with excellent acoustics. From time to time, the cast abandons the stage altogether and surrounds the audience. In these moments, the narrative stops, and we are briefly invited to indulge entirely in the beautiful blend of voices. Accompanied by only a single piano played by music director Kevin A. Smith, this production gives you the opportunity to rediscover Sondheim’s gorgeous score and hear it in a fresh, new way.

While the cast’s vocal talent is exceptional, the witty and wry humor in Hugh Wheeler’s excellent script doesn’t always land. The cast has a hard time finding the subtlety and nuance required to deliver the clever and biting comedy that lives in the book. Baritot, as Count Malcolm, and Futran, as Charlotte, stand out and realize the humor to its fullest potential without making their characters appear complete buffoons, which requires particular comedic skill especially in the case of Count Malcolm.

Devoted Sondheim fans will relish the opportunity to see this gem of a musical stripped of its ostentatious distractions and performed simply in this intimate and elegant chapel. The cast’s vocal talent serves the material well, and the lovely chapel showcases the voices exquisitely.

(A Little Night Music plays at The McKinney Chapel at the First Unitarian Society, 116 Pierrepont Street, Brooklyn Heights, through March 8, 2016. The running time is 2 hours and 45 minutes with an intermission. Performances are Fridays and Saturdays at 8; Sundays at 3. Tickets are $18 and are available at theater2020.com.)

A Little Night Music has music and lyrics by Stephen Sondheim, a book by Hugh Wheeler, and is based on the film Smiles of a Summer Night by Ingmar Bergman. This revival is directed and choreographed by Judith Jarosz. Costume Design is by Viviane Galloway. Lighting Design is by Giles Hogya. Stage Managers are Emily Grayson and Hannah Lemkowitz.