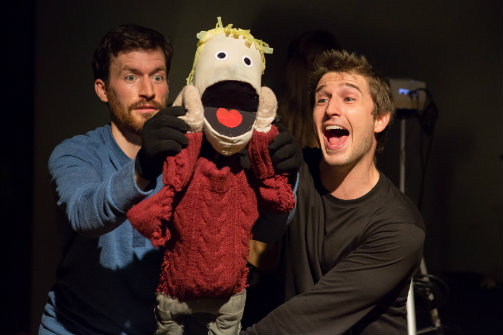 BOTTOM LINE: The perfect show for fans of Home Alone and/or '90s movies looking to get into the holiday spirit.

"You're what the French call les incompetents." "Guys, I'm eating junk and watching rubbish, you better come out and stop me!" "Keep the change, ya filthy animal." If just reading these lines fills you with nostalgia and makes you smile, you will enjoy Kevin!!!!! Recent Cutbacks specializes in parodies of beloved films and the company's holiday offering, at The PIT through January 7, is based on that classic Christmas movie, Home Alone. (Twenty-six years—holy crap, where did the time go!—is old enough to be a classic, right?)

Almost all the lines are actually from the film, though it's been streamlined at 60 minutes. A basic refresher: Kevin McAllister's family accidentally leaves him home alone for the holidays when they fly off for a vacation in Paris, and Kevin has to defend his house from burglars. This production uses miniature sets projected onto a screen, live action, and puppets. Director Kristin McCarthy Parker has a lot to juggle, so it's impressive how seamlessly scenes transition without missing a beat.

You don't need to have seen Home Alone to enjoy the skill involved in Kevin!!!!!, but because it's so fast paced, it might be hard to follow if you have no prior knowledge. Plus a lot of the fun comes from recognizing details from the movie: the strikingly accurate low-budget miniature sets, Nick Abeel and a puppet recreating the role played so memorably by Macaulay Culkin, and Natalie Rich channeling Catherine O'Hara perfectly. Everyone in the cast—rounded out by Sonia Mena as Harry (Rich also plays Marv, the other half of the "wet bandits") and Kyle Schaefer as the old man neighbor—deserves recognition.

A highlight of the show is hearing the John Williams score and other songs from the movie performed by a talented four-person choir dressed in festive holiday sweaters. They also provide sound effects. But the best part is actually when something goes slightly wrong. It doesn't happen often, but the cast hilariously saves itself through improv. It's a reminder of the joy of live theater—something you can't get from just re-watching the movie.