Off Off Broadway, New Play
Runs through 1.30.16
Walkerspace, 46 Walker Street 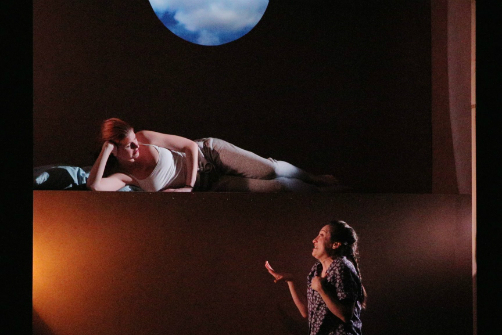 Kate MacCluggage and Lucy DeVito in In Quietness. Photo by Dutch Kills Theater.

“Times change – and then they change back.” In Anna Moench’s new spiritual comedy In Quietness, produced by Dutch Kills Theater, fundamentalist Christians bump up against liberal Manhattanites. Examining the rules of marriage and social roles which women and men must play, In Quietness packs emotion and uninhibited humor. Despite an easy ending, In Quietness dares to get deep and ask a lot of important questions.

Leaving NYC behind, Maxine (Kate MacCluggage) follows her grieving husband Paul (Blake Delong) to a Baptist seminary in Texas. As Paul begins ministry studies, Maxine enrolls in a home-keeping school for Christian wives. As Maxine, Kate MacCluggage has graceful complexity navigating a strained, stifled path of personal rediscovery. “I was being mean,” she comforts Paul through a remorseful smile, “and then I pretended that I was joking to make it seem like you are being overly sensitive – which is shitty.” MacClaggage skillfully captures Maxine’s two worlds: one of physical longing, the other of personal faith.

Delong allows Paul to search out the spiritual unknown with a mixture of sorrow and simplicity. He initiates discussions of faith in wonderful ways throughout the night. Speaking of the pure joy and love of worship without a hint of sarcasm, Paul describes the feeling of God to be “like a room full of song.” Delong offers up a mirror to the cynical New Yorkers in the audience who relish jabs at the ‘sweet and simple’ Christians on stage.

Paul has a series of mournful solo moments alone on stage, speaking to an offstage object of affection. Although moving, there is, perhaps, one too many of these moments. As the show wears on they feel less and less in character, sounding more like Moench’s own private commentary.

Moench’s script engages in conversations of liberal norms and fundamentalist expectations with sly one-liners and hard-won joy. A highlight of the evening is a midnight conversation between Maxine and her roommate Beth (Lucy DeVito). Beth used to be a bookstore clerk, Max was a top executive of an insurance firm. Beth asks, “Do you think you’re more valuable than me?” and then insists, “We are all equal to God,”

Max counters and questions the equality of men and women’s roles in the fundamentalist hierarchy, to which Beth retorts that husbands and wives are “equal – but different.” In a fundamentalist structure where the man is meant to lead while the woman must submit to his whims, how can there be true equality? Is there true equality, anywhere?

Director Danya Taymor’s production team are on point. Light designers Masha Tsimring and Caitlin Smith Rapoport along with sound designer Asa Wember are flawlessly in sync. The lights and sound seem to take each scene by the hand, gingerly urging the transitions along like doting parents to their preschooler. Set designer Kristen Robinson’s set is at first overly simplistic and hollow; with time it grows on you, turning into a testament to the reliability of a well-built home and family. Taymor finds vivid physical life in the compositions of knowing nods, well-timed ‘ahs,’ and smiles of solidarity; she seems fluent in the Texan Baptist body language. Taymor’s cast feels like they were born to play their parts and costume designer Beth Goldenberg’s outfits are their second skin. MacCluggage is striking in red dress and heels and Alley Sotto is a precious jewel in her austere teal skirt-suit, just to name a few of Goldenberg’s fine finds.

DeVito is heartwarming, until she turns into a real ball of fire. In one excellent moment, Beth preaches alone to the audience about the emasculation of the modern man; she runs through a litany of necessary corrections until finally losing it: “STOP WEARING JEWELRY!” As the leader of the school of Christian housekeeping, Terri (Alley Scott) arrives with a hot entrance and delivers unlimited stage presence throughout the night. Full of Southern hospitality she is a catalogue of Texan cadences and one-liners, from “Times change – and then they change back,” to “He’s always watching – even in IKEA.”

In Quietness has some stand-out performances and is definitely worth checking out for Danya Taymor’s superb direction. However, perhaps the most notable element of the show is the live audience. The SoHo viewers shamelessly eat up every punchline executed at the expense of the Southern fundamentalist which makes for a peculiar watching experience. To find out how the spirit move you, you’ll have to see In Quietness for yourself.

(In Quietness plays at Walkerspace, 46 Walker Street, through January 30, 2016. The show runs 80 minutes with no intermission. Remaining performances are Wednesdays through Saturdays at 8. Tickets are $18 and are available at dutchkillstheater.com.)

In Quietness is written by Anna Moench and directed by Danya Taymor. Set design is by Kristen Robinson. Lighting design is by Masha Tsimring and Caitlyn Rappaport. Sound design is by Asa Wember. Costume design is by Beth Goldenberg. The production stage manager is Kevin Clutz.