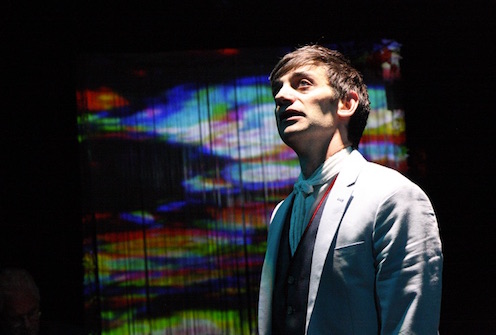 The prince will show you to your seat, the audience is told as they enter the reconfigured black box theater at the HERE Arts Center. The excellent Daniel Kublick plays Prince Myshkin in Robert Lyons’ adaptation of Fyodor Dostoyevsky’s The Idiot—this version titled simply Idiot—and he welcomes each audience member into their world with a sort of cartoony charm.

The casting of Kublick in the role of the Prince is a big part of what works in this production; he’s nicknamed “the idiot” precisely for his endearing naivety. His performance is warm, childlike, and captivating.

Directed & choreographed by Kristin Marting, Idiot takes a slice of Dostoyevsky’s 600-page Russian novel and condenses it into a 75 minute theater piece. Sound familiar? Dave Malloy’s Natasha, Pierre and the Great Comet of 1812 is a slice of War and Peace, similarly focused on the romantic trials and tribulations of its title character, but that’s where the similarities end.

The piece of the story Lyons gives us focuses on the Prince’s inability to decide between two women: Aglaya Epanchin (Lauren Cipoletti) and Nastasya Filippovna (Purva Bedi). Nastasya is more wild and mysterious, and has a bad reputation, whereas Aglaya is the polar opposite, and comes from a good family. We’re meant to see that Aglaya is the correct choice, but because of his own idiocy (which, again, is not so much idiocy but naivety), he’s blinded by Nastasya whenever she is in sight. So he changes his mind. A lot.

Nastasya also has another suitor, the tough Parfyon Rogozhin (Merlin Whitehawk), who is able to offer a lot of money in exchange for her hand in marriage. The Prince mentions that he might have money coming to him, but from where or who or why is not explained. Money seems to be a huge factor in his decision making here, but also not really. As someone who is not very well versed in Dostoyevsky's work beyond his philosophical ideas, the plot often seemed muddled to me. And Idiot tends to focus on the soap opera dramatics of the romantic relationships of these four.

There are several scenes including music, whether in a karaoke performances or an extended dance number. They’re fun to watch, but I cannot honestly tell you what the dramatic purpose was of any of those moments. They seemed to unnecessarily lengthen the run time.

Idiot is designed beautifully, with Eastern European patterns and colors, and lighting that is both aesthetically appealing and dramatically effective. (The environment is designed by Nick Benacerraf, and the lighting is by Jeanette Oi-Suk Yew.) Beyond that, there is an immense amount of technology used, including live video streams, karaoke, and photo booths, which are engaging but ultimately become distracting. I have to wonder if the plot would have been more clearly conveyed without all the bells and whistles.

I admire the ambition of the project, to take on something as epic as The Idiot and to distill it into a theater piece of less than 90 minutes. Maybe those who are more familiar with Dostoyevsky will find more to love in this show than I did.

Idiot is conceived by Robert Lyons & Kristin Marting, with text by Robert Lyons, based on a book by Fyodor Dostoyevsky. Directed and Choreographed by Kristin Marting. Environment Design is by Nick Benacerraf.  Video is by Ray Sun. Music composed by Larry Heinemann. Lighting Design is by Jeanette Oi-Suk Yew. Costumes are by Kate Fry.  Stage Manager is William V. Carlton. Assistant Director is Drew Weinstein.