The Hundred We Are 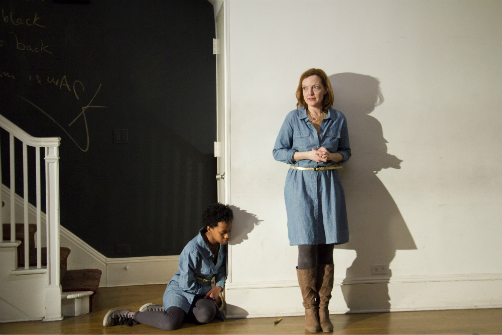 Mirirai Sithole and Orlagh Cassidy in The Hundred We Are. Photo by Derek Van Heel.

BOTTOM LINE: An open and honest portrayal of memory loss, mental illness and the pains of growing older.

How do we conceive and perceive the best version of ourselves, and does that version change throughout our lives? The Hundred We Are, a play now making its North American premiere at The Cell Theatre, seeks to answer those questions, tackling what it means to grow older, to lose sight of oneself and to view your own life not as an outsider but as an insider.

Written by 2011 Obie Award winner Jonas Hassen Khemiri and translated into English by Frank Perry, The Hundred We Are received the Hedda Award for Best Play in its Norwegian premiere in 2010. In its New York incarnation, directed by Erwin Maas, the play stars Mirirai Sithole, Orlagh Cassidy and Kitty Chen as the ambiguously-named 1, 2 and 3, respectively, and Caitlin Cisco as their shadow. 1, a young radical, 2, a middle-aged housewife, and 3, a clear-eyed world-traveler, meet front and center to decide if they should start anew.

It’s here you realize two facts: These are not three women but three parts of the same woman, different stages of the same life, the same voices in the same head of one incredibly conflicted, tormented woman; and somewhere along the way, something went horribly, horribly wrong.

We start from the beginning. This life isn’t the first of its kind; instead, you’re watching a replay, and sometimes even a replay of that replay. 1, the young revolutionary, is hell-bent on making sure the same mistakes don’t happen again. 2, seemingly contented at the start, is teaching, while 3 remains calm and comforting throughout.

What unfolds is heart-wrenching, not just for the content and performance but because whether or not your own story feels identical, there are undeniably similarities that you try your best to bury. As three parts of the same life play out in front of you, which one do you fit into the best?

Of course, whichever one you pick is all a matter of perspective. Like 1, 2 and 3, reality is very much determined by what you’ve created for yourself and what version of that you choose to acknowledge.

The show may not be immediately grabbing as the actors scrub through childhood and adolescence, forced to accept the inevitable. It isn’t until middle age takes center stage, fittingly, that the true introspection begins.

Truthfully, this is a piece that could not land well (or even survive) without the help of strong leads; in this production, however, it is a non-issue. Fabulously acted by Sithole, Cassidy, Chen and Cisco, with a particularly gripping, powerful performance from Cassidy, The Hundred We Are connects to the everyman of any age—or race. Whether blind or consciously cast, 1, 2 and 3 resemble one another only in fashion choice, but not once do you forget you’re watching three sides of the same woman.

A rare occurrence: The Hundred We Are is female-driven and woman-centric, although inevitably occasionally noticeably through the eyes of a man. Thankfully, in a show that features an all-woman cast and revolves around the pluses and negatives of one woman’s life in particular, the show does justice to the female experience.

And as a result, it does not skimp on the details or the messy stuff: suicidal thoughts, rape, sexuality, self doubt, exaggerations and outright lies. Paired with the intimacy of the theatre—there are only three rows within reaching distance from the players—it’s hard not to feel like you are part of the process. The introspection you’re witnessing is just as much yours as it is the woman in front of you. You are allowed to reflect on your own aging, the memories that are fading and your “gold-framed memories,” the memories you hold tight to you.

In The Hundred We Are, only one reality is certain: the inevitability of growing older and living with fading memories and a past that is slipping away from us, whether or not we want to hold onto it in the first place. Do we run toward or away from the obstacle of our fading memory?

Inevitably, whether we choose to live with it or die with it is how we decide what is real and what isn’t. But in the words of the protagonist (which version is for you to find out), it's “never too late for people like us.”