By Matthew Minnicino, based on the play by Henrik Ibsen; Directed by Joseph Mitchell Parks
Produced by Wandering Bark Theatre Company 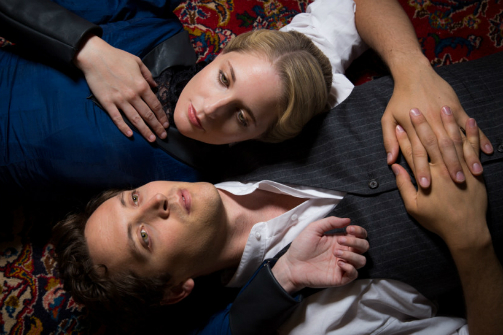 BOTTOM LINE: A new adaptation of Henrik Ibsen's classic play with modern wits and new perspectives on those familiar characters.

And that was the tragedy.

Matthew Minnicino’s new adaptation of Henrik Ibsen’s classic explores and sheds new light on this dazzling character, a female Hamlet in all her complexity, and more importantly, vulnerability. A simple set introduces Tesman’s sitting room where most of the action takes place. A portrait of General Gabler hangs on the back wall, like a looming indication of a dark undercurrent beneath the heroine’s composed though nonchalant disposition.

Before the story unfolds, choreographer Brad Landers does an excellent job creating a set of stylized movements to introduce each character, a sequence of simple gestures to bring together as well as distinguish the players on this particular game as archetypes: Hedda (Valerie Redd), the disillusioned trophy wife in a marriage of convenience; George (Kyle Shaefer), the loyal yet boring academic; Miss Tesman (Kathleen Marsh), who considers the sole purpose of her life to be serving others; Judge Brack (Terence MacSweeny) who uses his power like a weapon; Thea Elvsted (Susanna Stahlmann), the companion; and Eilert Lovborg (Quinn Franzen), the troubled poet. The ensemble moves to their designated position like chess pieces, and dances the dance of class and propriety to the familiar tune of Dmitri Shostakovich’s "Waltz No. 2."

Hedda (Gabler) is a condensed version of the original Ibsen play and follows the plot: Hedda joins George Tesman in a marriage of convenience, and thus resign herself into endless boredom and misery, so as to continue a certain standard of life. The reappearance and reformation of an old fling, Eilert Lovborg, rekindles Hedda’s thirst for power. Minnicino has the keen ability to capture the Ibsenian essence of each character, and infuses the new version with rhythms that are more palatable for a modern audience.

One of the most exciting focal points in this production is the apparent jealousy Hedda has for Thea, who runs away from her own marriage to be Lovborg’s companion, and moreover, colleague. In a way, because of her contributions and academic values, Thea is the one female character treated as equal to men in the misogynistic world Hedda lives in. She was Lovborg’s muse and collaborator, and later on starts a work relationship with George Tesman. On the other hand, the adaptation exposes Hedda’s cowardice and lack of purpose in life. Like her father’s trusty pistols, Hedda is locked in a gilded case, displayed yet useless, deadly yet ignored.

A team of strong actors presents this sound production of Hedda (Gabler), however they do not reach all its potential. The marks the adaptation tries to hit are veiled under period clothing, a choice most likely due to the team’s respect for the play’s original setting. With such a timeless story and a text that has the capacity to bridge the past and the present, I hope that the next iteration of Minnicino's adaptation will shed even more of its fetters, and let Hedda unleash all her power.

(Hedda (Gabler) plays at IRT Theater, 154 Christopher Street, 3B through October 8, 2016. The running time is one hour 30 minutes without intermission. Performances are Tuesdays through Saturdays at 8 and Sundays at 3. Tickets are $15 in advance, $18 at the door, and are available at brownpapertickets.com. For more information visit wandering-­bark.org.)