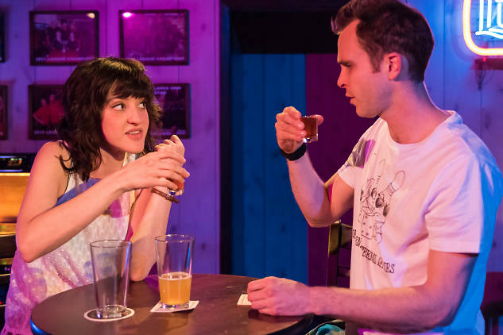 Keilly McQuail and Gabriel King in Half Moon Bay. Photo by Steven Pisano.

BOTTOM LINE: Two Millennials meet and do the tentative romance dance in this funny new play.

A bar inside a Santa Cruz bowling alley would seem not the likeliest place for a love story to take off. But for Gabe (Gabriel King), a 20-something bowling enthusiast and Annie (Keilly McQuail), who is even more enamoured of booze, it works perfectly.

Sitting alone at the bar under a neon Lite Beer sign, a wall adorned with league championship photos behind her, Annie takes note of Gabe coming in and sarcastically compliments his bowling shoes. He immediately invites her to watch him bowl the following Saturday, which she, perfectly blunt, tells him is weird. But there’s a spark all the same. She’s at the bowling alley with people from her new marketing job and needs to get back to them. Annie has the upper hand, keeping him off kilter with her not-quite jokes and aloofness. He is all puppy dog eagerness, but single-minded about her coming back to see him bowl. Just when it seems Annie is about to walk out and Gabe is going to be left disappointed she says, “You keep talking about bowling when I suggested going to a movie or having a coffee or fucking in the bathroom.” Stunned but quickly recovering, Gabe responds, “You did not say anything about fucking in the bathroom.” Her retort: “I was being hyperbolic.”

Things progress: she comes back the following Saturday having missed the game but shyly, she gives him a shirt she’s made. She admits she got freaked out on the way over and needed some drinks to calm her nerves, which is why she’s late. She’s also been fired from her job. He’s shoeless, having lost his new Etonics in a bet on the game, his confidence shaken when she didn’t show. They drink, which leads to more drinking back at Annie’s apartment, which is littered with bottles. And of course in time-honored tradition they play Truth or Dare, accompanied by vodka shots. Tellingly, Gabe declares he’s an open book. She then brings out cocaine. He asks her if she drinks because she’s unhappy. He says he’s happy because he survived being hit by a car and he’s with her on this date. Annie recoils at the honesty behind his dare for her to play him music from the band she was once in. She agrees but only briefly. Gabe tells her about his gambling addiction, his easygoing demeanor showing cracks. Annie reads him an email her aunt sent her that reminded her of Gabe, immediately regretting the intimacy of the moment. Tenderly, he holds Annie and tries to sooth her. The dynamic between them has shifted. Gabe, who had previously come across as an earnest but goofy guy working in a paint store, clearly has a sweetness and decency to him. As Annie’s seemingly together life is actually going off the rails, her toughness starts to disappear. Her true self and its fragility come into focus, allowing for the possibility of the two of them beginning something.

The meet cute is certainly not a new conceit and in the wrong hands could come off as tedious and clichéd. But playwright Dan Moyer brings a freshness to his take, combing humor with sexiness and pathos. He’s written great lines for the characters to spar with while laying down well-crafted layers as the emotions steadily go deeper. King and McQuail, to quote the play, "stick the landing" with great comedic timing. King is winning and genuine, making Gabe an underdog easy to root for. McQuail, in the more complex role that could have veered into bitchy, is very effecting, her throaty voice switching from banter to more tremulous, conveying a touching and believable vulnerability.

Director Jess Chayes steers the flirtatious and bruising ballet with a light hand, maintaining a lively choreography, both verbally and in the constant advancing and retreating between Annie and Gabe. Reid Thompson does a terrific job transforming the space whole cloth from a lovingly-curated bar to a messy, lived-in apartment.

Although the story concerns a pair of 20 and 30-somethings, its appeal isn’t limited to that demographic. It speaks to a universal truth: we want to connect with other people, but first we have to try to get past the defenses, the baggage and the struggles.

(Half Moon Bay plays at Cherry Lane Theatre, 38 Commerce Street, through June 4, 2016. The running time is two hours with an intermission. Remaining performances are Thursday, Friday and Saturday at 8. Tickets are $26 and are available at cherrylanetheatre.org/onstage/half-moon-bay or by calling 866-811-4111.)

The cast is Gabriel King and KeillyMcQuail.