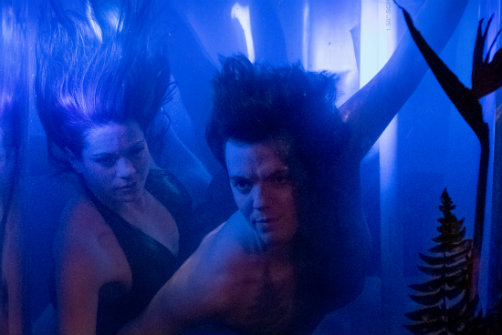 BOTTOM LINE: The perfect escape from a cold winter to a unique and thoroughly immersive 1970s-era tropical fantasy.

Some of the reasons people go to the theatre are to be moved, touched, and entertained. The Grand Paradise, the newest immersive theatre piece from Third Rail Projects, the group that produced the long-running Then She Fell, does all three of these things, often literally, and does them very well.

Housed in a Bushwick factory transformed for the production, audiences start off with boarding passes and a tongue-in-cheek flight safety video that establishes the late 70s setting and explains the rules for the slightly lewd and irreverent evening ahead. The audience is then ushered into the central courtyard of The Grand Paradise (the entire design finds the right balance of kitsch and opulence), where we are graciously welcomed and lei-d by members of the attractive, friendly, and flirtatious resort staff. A flowing fountain, seemingly the fountain of youth, is the focus of the room, and cast members ritualistically approach it, fill up bowls, and then drink. There is also a tank where aqua-men and women appear, wink at us, and then retreat. All the meanwhile, a pleasant tropical and surf rock score (brilliantly and seamlessly composed by Sean Hagerty) immediately calms and adds to the environment.

The loose plot of the evening is that of a family of tourists who have traveled to the resort, made up of a Mom, Dad, Older and Younger Sister, and a Boyfriend (though these relationships were only made clear by the cast list I saw after the performance—and note that the cast changes with each performance). Throughout the evening they lose their inhibitions and immerse themselves in The Grand Paradise’s hedonistic and free-loving way of life. Mom (at our performance played by Carly Berrett-Plagianakos) is the first to be lured by the sultry-voiced Siren (played by Lily Ockwell). As the Siren sings, the two exchange outfits, establishing the idea of transformation in this world. The other family members find their diversions including Dad, played by co-Artistic Director and Creator Tom Pearson, with Venus, a 50s-era pinup girl played by Jessy Smith—their's was the story that I mostly followed through the evening.

Part of the appeal of these immersive theatre events is the individualized experience that we have as audience members. No two audience members’ journeys are the same (though, in comparing notes with my companion, while we encountered different moments, our collective understanding of the piece was virtually the same, a testament to the creators' ability to create a unified whole out of so many seemingly disparate parts).

I was the first audience member pulled aside to a private room for a tarot reading that focused on my past, present, and future, and the intersection of my desire with what I currently have. This turned out to be a main theme for the evening as throughout the experience, characters performed speeches involving the knots we get ourselves into, the finite amount of sand in the hourglasses of our lives, and the mapping of our desire and destiny (where I got to use a pencil compass…something I haven’t done since high school).

One of the beauties of The Grand Paradise is that it allows for so many of these smaller, intimate moments. The cast, all trained as dancers, effortlessly and elegantly guide the audience through the evening and truly make you feel as if the performance was being done exclusively for you. I got home and wanted to find and friend them all on Facebook, as it seemed as if we shared a really fantastic time together. It is clear they are having fun and, though all seem to have been directed to share the same lascivious smirk the entire time, the evening is never smarmy or uncomfortable. Even when peeping in on two characters about to heavily make out, there is titillation but things never become explicit or graphic. We are made to feel safe and welcomed. When a cast member takes your hand and whispers, “Come with me,” there is a delight in being part of a secret, part of something bigger than you, and part of their world.

Third Rail is “dedicated to re-envisioning ways in which audiences can engage with contemporary performance” and, with The Grand Paradise, they do exactly that. Audiences escape for two hours that both fly by and yet feel satisfyingly endless. We return to our lives revived, as if we too have had a drink from the resort’s fountain of youth.

(The Grand Paradise plays at 383 Troutman Street in Bushwick, Brooklyn, through September 4, 2016. The running time is 2 hours without an intermission. Performances are Tuesday-Sunday at 7 and 10:30. All audience members must bring valid government-issued photo IDs. Because of the immersive nature of this piece, audiences may be standing for significant periods of time over the course of the performance. Environments contain a number of textures (such as a beach with sand), so comfortable shoes are suggested. Tickets are $95-$150, available at thegrandparadise.com. For more information call 718-374-5196.)