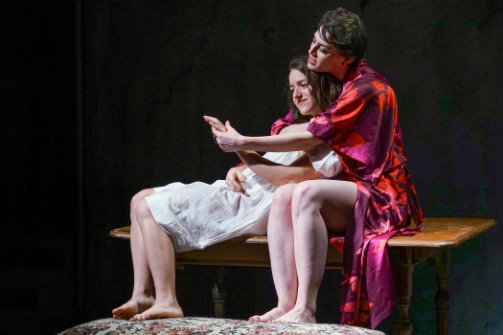 The scandalous 1923 Broadway premiere of Sholem Asch’s God of Vengeance is the inspiration behind Paula Vogel's Broadway-bound Indecent, a play that reveals glimpses of Asch’s provocative work. Especially for those who saw Indecent at the Vineyard last season, or who are planning to see it this spring at the Cort Theatre, the New Yiddish Rep's production of God of Vengeance is an enticingly timely opportunity to see Asch's work performed in its original Yiddish.

God of Vengeance was a hit play written by then 27-year-old Polish-Jewish writer Sholem Asch. It tells the story of Yekel (Shane Baker), a brothel owner who hopes to keep his teenage daughter Rifkele (Shayna Schmidt) virginal, and thus marriageable, at any cost. To protect his daughter, Yekel purchases an expensive Torah scroll through the practical and greedy Reb Eli (performed convincingly by New Yiddish Rep's artistic director David Mandelbaum); Yekel believes her purity might ultimately redeem his sinful business. Rifkele, however, falls in love with Manke (Melissa Weisz). a young prostitute downstairs.

God of Vengeance premiered in German at the world-famous Deutsches Theater in Berlin, and within months it had been produced around Europe, in Russian in Moscow, and in Yiddish in both New York and Chicago. Europe’s openness to the play during the early twentieth century was a remarkable contrast to the reaction of New York's Jewish community. Rabbi Joseph Silverman of New York’s prestigious Temple Emanuel thundered that the play “libels the Jewish religion” and filed an official complaint during its Broadway premiere. Arrests of both the cast and producer, along with a trial, followed.

New Yiddish Rep's God of Vengeance is directed by Eleanor Reissa, who also plays Sarah, Yekel’s wife and former prostitute. Stories about brothels and prostitutes in the early twentieth century were not novel—Shaw's Mrs. Warren's Profession is just one example—but the play’s stark contrast between the brothel and its prostitutes, and Yekel's home, was groundbreaking in his time. Even today, Asch's play is relevant and its core ideas—religious hypocrisy, prostitution, and the pure love between two young women—are striking.

This stage rendition loses some of Asch’s poetic, literary touches. For instance, the most invigorating part of Asch's script is the love scene between Rifkele and Manke, who sought solace, peace, and a release from each other in a world dominated by harsh, authoritative men and insensitive societal norms. I would like the moments between Rifkele and Manke to linger longer in order to savor that beautiful and innocent energy between two young women in love. The opening scene also does not capture the time and mood; instead, we are presented with a modern setting. I couldn't quite place the time and location—too many colors and styles in the costumes distract from the transportive power of the original text. And here, the supposedly older and manipulative Hindel (Caraid O'Brien) is now similar in age to Manke. This doesn't help make the difference between these two female characters clear, a distinction that would change the interpretation of the story drastically. However, I enjoyed the music accompaniment, composed by Billy Martin. And the upcoming Indecent aside, I still think this is a play worth seeing and reviving, especially for its statement on religious hypocrisy, certainly a pertinent issue today, and one applicable worldwide.

God of Vengeance is by Sholem Asch. Directed by Eleanor Reissa. Set and Costume Design is by Vicki Davis. Lighting Design is by Kirk Bookman. Sound Design is by Jesse Freedman. Original score is by Billy Martin. Dramaturg is Caraid O'Brien. Stage Manager is Mark Brystowski.