Off Off Broadway, Play
Extended Through 7.30.16
The People’s Improv Theater, 123 East 24th Street 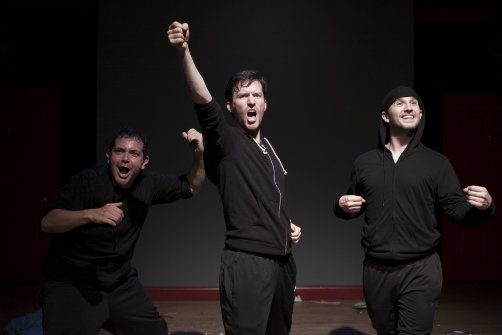 BOTTOM LINE: Three actors and a foley artist reenact The Fellowship of the Ring in this hilarious, hour-long homage.

Arguably a classic of modern cinema, Peter Jackson’s Lord of the Rings trilogy is one of the most well-loved, religiously-quoted, and oft-parodied film series of the last decade. Clocking in at over three hours per movie, it’s also one of the longest. Luckily for us, comedy troupe Recent Cutbacks has distilled the trilogy’s first installment, The Fellowship of the Ring, into a lean and hysterical sixty minutes with Fly, You Fools! The brains behind last year’s Jurassic Park spoof Hold On To Your Butts, Recent Cutbacks now gives Fellowship a similar treatment, reuniting with director Kristin McCarthy Parker (Puffs; Kapow-i GoGo) for a three-man, shot-by-shot reenactment of the iconic film.

Dressed in black hoodies and stationed in a circle of props, performers Nick Abeel, Kyle Schaefer, and Matt Zambrano follow the movie’s every hairy footstep, recalling Frodo Baggins’ acquisition of the One Ring and his joining with a band of wizards, elves, dwarves, and humans to cast it into the fires of Mount Doom. The trio plays each character with remarkable comic precision, from earnest, knee-high Hobbits to a mincing Legolas and hilariously oversexed Aragorn. Zambrano’s Gandalf is especially funny, mimicking the wizard’s bristly mannerisms and distinctive baritone to near perfection. The actors frequently nod to Fellowship’s cinematography, nimbly physicalizing the film’s sweeping panoramas, CGI-heavy fight scenes, and poignant close-ups. Self-referential humor abounds as the troupe pokes fun at the film’s actors (an Elvish warning against watching Liv Tyler’s Empire Records) and the story’s plot holes (why didn’t they just ride eagles instead of walking all that way?). Hardcore fans will relish these inside jokes and Fools’ near-verbatim attention to detail; while one need not be a Lord of The Rings geek to enjoy the show, familiarity with the series certainly enriches the experience.

Fools’ comic success owes as much to its clever prop usage and sound design as to the skills of its cast. Badminton rackets become swords, oscillating fans blow paper snowflakes, toy boats sail across spray-bottle-misted rivers, and red-bulbed flashlights invoke the hellish Eye of Sauron. The Mines of Moria sequence from which Fools takes its name is portrayed almost entirely with shadow puppets, rendering its human-sized monsters even larger than life. Likewise, the duel between heavy-bearded wizards Gandalf and Saruman is side-splittingly reduced to two flailing white wigs on sticks.

Blair Busbee’s stage-side foley artistry forms an indispensible atmospheric backdrop, almost a character in its own right. Armed with coconut halves, tin cans, bird-call whistles, and her own voice, Busbee’s sonic elements enliven the show and firmly install us in the world it parodies. She periodically joins the men onstage, offering up an imposing Galadriel and a hard-to-match Gollum impression.

As its source material exists within a trilogy, Fools practically begs for a sequel. Translating the battle-heavy Two Towers and Return of The King into this format would prove difficult indeed, but I don’t doubt that Recent Cutbacks would be up to the challenge—or that I would be alone in saying I’d love to see them try.

Fly, You Fools! is directed by Kristin McCarthy Parker and Created and Presented by Recent Cutbacks. Producer is Allyson Morgan. Musical Arrangment and Vocals by Kelsey Didion. Sound/Foley by Blair Busbee. Lighting Design by Cody Richardson. Graphic Design by Larissa Jantonio. Board Operation by Emily Goforth.

The cast is Nick Abeel, Kyle Schaefer, and Matt Zambrano.