By Danai Gurira; Directed by Liesl Tommy
Produced by The Public Theater 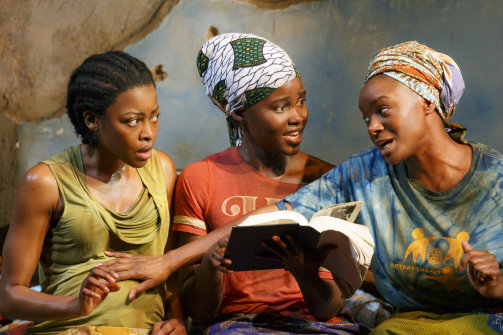 BOTTOM LINE: A blistering drama about the final months of the Liberian War deservedly transfers to Broadway from the Public Theater in this high wattage production.

A little more than a decade ago, Liberia had a free election, voting in a woman for president, a first for Africa. This came after 14 years of violent coups, bloodshed and the displacement of more than a half million people. Playwright Danai Gurira drops us into the heart of the days during Liberia's second Civil War circa 2003. It is an ugly and grim heart but there is love, friendship and strength to be found because of the women.

The “wives” belong to the unseen Warloard or Commanding Officer as they call him. There’s #1 (Saycon Sengbloh), who was grabbed by rebels in the bush when she was 12 or 13. Now in her mid-20's, she’s the eldest and by virtue of her arrival, the one with the most seniority and the most respect. Wife #3 (Pascale Armand) is a little younger and pregnant. The women live in a spare shack with little food, bickering about clothes, hair and their place in the household. The C.O. has stopped showing interest in #1, “jumping on” #2 (Zainab Jah) more, which, along with her prized wig, is something in which she takes great pride. They’re hiding The Girl (Lupita Nyong’o), who #1 is trying to protect because she is still innocent and she sees something special in her. The Girl is 15 and from one of the cities, sent to school by her mother so she could learn to read and write. The Girl wants to know details about #1 and #3 and tells them she wants to maybe become a constitutional lawyer one day. The other two, uneducated, don’t know what that is and can’t fathom another life. She reads to them from a Bill Clinton biography the C.O. has brought and they eagerly listen, christening Monica Lewinsky #2 Wife and wondering if they all live together happily as they do in Liberia.

When The Girl goes outside at night unaccompanied to relieve herself and is raped (offstage) by the C.O., it sets in motion her internal conflict of how she is going to get through the war. Her struggle mirrors the emotional battles the other wives must fight while a faction of female peacekeepers is slowly gaining momentum in the countryside around them. For the Girl, her path is steered by the return of #2, as fearsome and tough as the men but more calculating, a woman who determined her own fate by becoming a soldier. Clad in crop tops and sparkly jeans, her allure is that she survives on her own terms, getting into bed with men who supply her with merchandise or protection. #1 is offered a much different chance when Rita (Akosua Busia), resplendent in all white, also comes back. Rita is now part of the Women of Liberia Mass Action for Peace, a group seeking to end the war. Formerly, Rita was a successful businesswoman who lost her daughter to the rebels. She asks #1 her about her family and the name her parents gave her, attempting to give her back some of her humanity and dignity. She knows her name is Helena and Rita shows her how to write it in the dirt, sparking something in her. Wife #2 also reclaims her name, Bessie. When they are given their freedom The Girl picks up her book and then her gun, her future left unclear.

Nyong’o, delivering the full force you would expect of a headliner, has a sweetness and gentleness in her early scenes but she is equally compelling when in turmoil later as the conscience she thought would be clean and clear has been gutted. Jah is riveting and scarily effective as a woman who is unapologetic about the choices she has made to stay alive. Armand is a welcome source of comic relief, #3’s vanity and superficiality used for laughs while demonstrating a very human need for beauty to counter the daily cruelty. Busia lends grace and poignancy to her portrayal of Rita who easily could have turned to rot but instead finds a calling. Sengbloh holds her own in the least showy of the roles, bringing a great deal of depth to #1, who has maintained her compassion and moral compass in spite of the horrors she’s endured.

Gurira, an award-winning playwright best known for her role on The Walking Dead, has written a thought-provoking, powerful examination of the devastation wrought by a far-away war responsible for brutalizing countless women and children, and one largely forgotten. She skillfully builds tension while weaving in moments of humor. In her hands, the characters feel utterly real. The pacing did feel a little off at times, the action moving fairly leisurely in the first act and then very amped up in the second. I’m not sure if that was deliberate on the part of the play or a choice made by director Liesl Tommy, but it made the arc for The Girl feel somewhat rushed. Clint Ramos has a great eye for wardrobe that uniquely speaks to each character, from the flashy colors Jah sports along with her Uzi to the cobbled together outfits the wives make from the clothes the C.O. gives them. And with few adornments other than a faded flag and some pots, he’s created a space that looks suitably decrepit and lived-in.

More than a history lesson, Eclipsed is a needed reminder of all of the violence being carried out against nameless victims even when the eyes of the world are watching.