The Dudleys! A Family Game 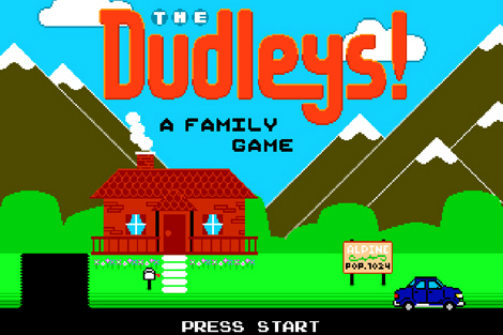 BOTTOM LINE: With amazing design but unfocused storytelling, The Dudleys! A Family Game is a flawed show built on a great premise.

If you play video games (or if you have a teenager), you might be familiar with the concepts of extra lives, secret levels, and role-playing adventures. In The Dudleys!, a unique play that utilizes the retro animation and nostalgic tropes of 8-bit games in order to explore one family’s past, the digital world comes crashing into reality.

The show opens with the scruffy Gamer (Karsten Otto) entering the large, empty basement set with a suitcase and the bleary look of hungover businessman. Noticing his old NES system still set up, he eyes it with silent but clear recognition. After dealing with the electrical glitches inherent in old game systems—an inside joke to anyone who spent time blowing into Super Nintendo cartridges—he sits down to play, his little bottle of tequila by his side. However, instead of Super Mario Bros. we discover that he is playing The Dudleys! A Family Game. Against the backdrop of a suburban side-scrolling adventure, the Gamer encounters the titular family. Over the course of the show, it becomes exceedingly clear that it is more than just memories of video game technology the Gamer is re-encountering.

First and foremost, the design team behind The Dudleys! deserves tremendous praise. The physical set resembles a realistic nerdy teenager’s basement bedroom, complete with boxes and faux-wood paneling and a cozy corner where the Gamer spends almost the entire play. Once we enter the game, however, the world becomes much more expansive. With exquisite, clever detail, the animated levels of The Dudleys! created by Reid Farrington and his team exist in the interesting beauty of old-school crude game design. There are numerous levels, each evoking a specific memory or location, and they are reminiscent of classic 80s games like Street Fighter and Contra, and even Bart’s Nightmare. With an original 8-bit musical score, the show creates a convincingly immersive world that cleverly plays with the idea of memory. The show is at its best when it is featuring the imaginative animated scenes and offering opportunities for the actors to interact with textures and ideas in creative, clever ways.

For example, Dudley matriarch Clara (played with stirring focus by Erin Treadway) has to jump into the kitchen cabinets to break them open and serve dinner in an early scene. In another moment, Portugal and Outer Space are the background for a rambling Mormon missionary adventure that the two Dudley boys, Vic (Erik Kochenberger) and Derek (a strong Scott Thomas), must complete, proselytizing to robots and space aliens to no avail. Featuring creative choreography by Melinda Rebman, the scene achieves a brilliant balance between storytelling and game-play. However, as these examples may indicate, the story of The Dudleys! is all over the place. The plot ambles along and is presented in a non-linear manner that befits a disjointed memory play, and does not make sense in the context of hyper-linear side-scrolling games.

At the center of the narrative is zombie-like father Tom (a compelling Joe Burby, making the most of limited material) whose recent death from cancer and the following fallout has impacted The Dudley’s lives forever. Hyper-practical Clara undergoes a crisis of faith, preferring the afterlife-less beliefs of Judaism over the focused cheeriness of the family’s Mormonism. The oldest son Vic is a formerly athletic good guy. The younger son, Derek, a snow boarder slacker with an arrest warrant in Wyoming, spirals further and further, blaming his father’s bad investments for being a failure. Daughter Sylvia (the engaging Marlowe Holden) fills the role of the golden child, a promising student who, we hear many, many times, is “going to Georgetown Law next year.” More narrative moments appear, as well as more flattened archetypal character threads, but unfortunately, they never really come together to form any coherent whole.

Tom, a talkative and relatively affable zombie, offers up the prospect of “family secrets,” though none ever really appear. Everything we learn in the first scene/level merely gets repeated again and again in slightly different ways. The biggest plot note is that Tom is dead/dying and Vic will eventually leave for New York. There is some light discussion of faith, talk about how we cannot play our lives in retrospect, and what the nature of success is, but these lovely themes are not developed any more than a start screen musical sting. They simply keep looping. These problems are particularly notable because of the tremendous promise of the show’s premise. The idea that video games are the locus of imagination and memory for the modern age is a sophisticated perspective, yet The Dudleys! never seems to move past that initial idea. It presents a lot of really great looking loops with very little payoff at the end. They may need to go back to the tutorial.

(The Dudleys! A Family Game plays at HERE Arts Center, 145 6th Avenue, through October 29, 2016. The running time is two hours and ten minutes with an intermission. Performances are Wednesdays through Saturdays at 8:30; Sundays at 4. Tickets are $18 and are available at here.org or by calling 212-352-3101.)