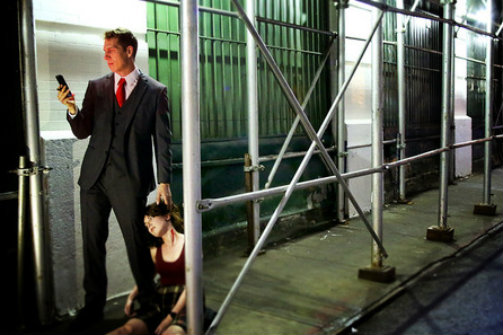 BOTTOM LINE: An enjoyably sexy exploration of vampires in the modern day, arriving just in time for some Halloween thrills.

Dracula is back and you should all be very, very scared. Also, a bit aroused? Based on the novel by Bram Stoker, Hunger & Thirst Theatre’s Dracula tells the tale of the eponymous Count (Tom Schwans) as he moves to America and targets Mina (Patricia Lynn, also playwright), the wife of a young real estate agent named Jon (compellingly portrayed by Jordan Reeves, who quickly captures and keeps the audience’s allegiance). When Mina’s best friend Lucy (Katie Consamus) is seduced and changed by Dracula, Mina must team up with Lucy’s ex-fiance Jack (Jordan Kaplan), and her husband-turned-vampire hunter in order to stop Dracula from turning her next.

Schwans’ Dracula, despite rarely appearing on stage for prolonged periods of time, is a looming and literally echoing presence throughout the show. His transformation from a hunched and jumpy creep in the opening to a much more subtle, much more modern, and in fact considerably more dangerous creep highlights the sense that one doesn’t need to be a vampire to be a serious threat to women. It’s easy to see him in his posh suit with his honeyed words as the perfect representation of every attractive but ever-so slightly off guy a woman has met at a bar. In a similar vein, perhaps the most terrifying performance of the night goes to Lauren Lubow’s Renfield. Although she isn’t a vampire, her complete unpredictability makes her a frightening joy to watch, and she often feels more dangerous than the actual monsters slinking about the stage.

Pacing wise, the production is a bit slow. It takes a decent amount of time for the plot to truly kick off and the action to ramp up, although the exposition itself is enjoyable. There is a cinematic “slow-burn” quality to the first half that would perhaps be better suited to a longer piece or different medium. Once Jon makes his return to the plot, however, the action rolls along very quickly toward its ending. Without spoiling much, this ending doesn't show a rather crucial scene (we hear about it later) and feels somewhat unsatisfying after becoming so deeply engaged in the story. Hope exists, however, in the program bios, as playwright Lynn hints at a planned sequel.

While the tech for the show is largely very simple, allowing for an appropriate focus on the actors in what is ultimately more of a psychological thriller than a spectacle piece, special notice should be given to lighting designer Remy M. Leelike’s fantastic work during the climax. Her interplay of light and dark adds a considerable amount of tension to an already tense moment, and allows for a brilliant jump-scare, the likes of which I have not seen on stage before.

It is also of importance to note that Hunger & Thirst Theatre is doing some great work not only in theatre, but in charity. After the show, audience members are encouraged to donate money and schedule time to donate blood for the New York Blood Center. It’s thematically on point and commendable.

Overall, while the play’s structure itself is somewhat flawed, the great performance work and sultry-scary mood makes this piece a a good Halloween season date night thrill.

(Dracula plays at the Gene Frankel Theatre, 24 Bond Street, through October 29, 2016. Running time is 1 hour 45 minutes without intermission. Performances are Wednesdays at 7; Thursdays, Fridays, and Saturdays at 8, and Sundays at 2. Tickets are $18 and available at hungerandthirsttheatre.com.)

Dracula is by Patricia Lynn, based on a book by Bram Stoker. Directed by Geordie Broadwater. Fight Choreography is by Jordan Reeves. Set Design is by Jonathan Cottle. Lighting Design is by Remy M. Leelike. Sound Design is by Randall Benichak. Costume Design is by Caroline Berti Dialect Coaching by Lizzie King-Hall. Stage Manager is Heather Olmstead.