To purchase tickets visit disastermusical.com or call Ticketmaster at 877-250-2929 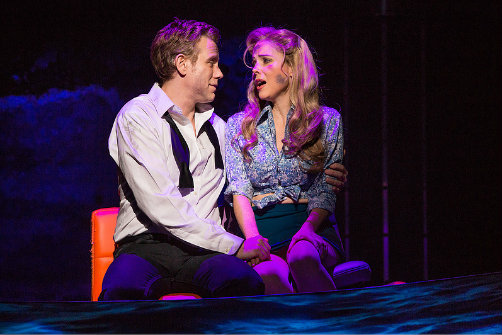 Airport, The Poseidon Adventure, Earthquake, The Towering Inferno…the 1970s might be called the golden age of the disaster movie. It’s also a decade that gave us a lot of terrific music. In Disaster!, Seth Rudetsky and Jack Plotnick bring these two worlds together, with the help of an outstanding ensemble cast.

Tony (the wonderfully sleazy Roger Bart) has cut all possible corners in order to get his new floating casino, moored on the Hudson River, open on time and under budget. The opening night party is a veritable “Who’s Who” of late-70s nightlife, including down-on-her-luck soul diva Levora (Lacretta Nicole), along with some eager folks rich enough to get in, like the newly retired Maury (Kevin Chamberlin) and his wife Shirley (Faith Prince). And Tony has a lot to handle— his girlfriend Jackie (Rachel York) is headlining the stage show, yet Tony is more interested in pursuing Marianne (Kerry Butler), a reporter after her big break. Tony is also trying to avoid noted disaster-expert Professor Ted Scheider (Seth Rudetsky), who suspects something is very much amiss. Also on board are cater-waiters Chad and Scott (Adam Pascal and Max Crumm), who are looking for some excitement; Sister Mary Downy (Jennifer Simard), who is looking to save some souls; and Jackie’s twin children Ben and Lisa (Baylee Littrell), who are looking for each other.

As you may have guessed, Disaster! is filled with tons of…disasters. It probably goes without saying that Tony’s casino doesn’t make it through the night unscathed, but to give away much more of what happens will spoil the fun. The ensemble cast never lets up: everyone gets several moments to shine, although the clear stand-out is Simard, who brings down the house with her portrayal of a nun torn between two loves. You’ll never look at a slot machine in the same way again. Tobin Ost’s sets bring the 1970s flooding back, as do William Ivey Long’s costumes, and both ingenious designers clearly have fun with the horrors that strike in act two. (I believe the previous Off Broadway version was much more modest in its design elements, but if there was ever a case where more is more, Disaster! would seem to be it).

But the laughs come not just from the increasing insanity of the plot, or from the over-the-top performances, but in the way Seth Rudetsky and Jack Plotnick use their book to deliver unexpected twists on 1970s tunes. Partly helped by the vagueness of popular music lyrics (“I’m lookin’ for some hot stuff”), Rudetsky and Plotnick set up jokes in their script that only become apparent once the actors break into song. They also wisely don’t use the entire song; Disaster! zips along because the authors know when the joke is done and it’s time to move on, which allows the talented cast to shine even more brightly in the more extended bits of physical comedy.

Sure, I have a few minor quibbles—there is the occasional unnecessary anachronism, and for whatever reason (fidelity to the racial politics of the 1970s?), the cast is almost all white, leaving the amazing Lacretta Nicole to be the “token black girl.” Yet such criticism feels almost churlish given the fun that’s to be had here. While in real life, ignoring scientists’ warnings leads to the truly terrifying effects of global warming, on Broadway, such behavior is the recipe for a Disaster! that you would be foolish to miss.