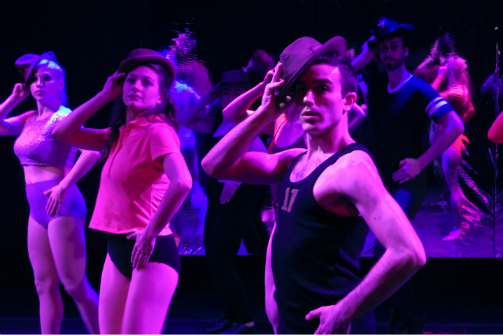 The cast of A Chorus Line.

BOTTOM LINE: True to the vision of the original 1975 production, A Chorus Line hits hard all of the joy and sadness as a group of dancers try to land one of the few spots available in a Broadway show's chorus line.

A Chorus Line is a historical show. Not only did it open on Broadway in 1975 and have over 6,000 performances during its run, but it won countless accolades from the Drama Desk to the Tony Awards. With big shoes to fill here, director Tom Rowan triumphs. It's clear that he wanted to honor the initial work. Understandably so, considering the musical numbers are ubiquitous today as a result of a motion picture version and references in popular television shows over the past few decades, from The Simpsons to Scrubs to Phineas & Ferb.

Show business is tough, and just like athletes, dancers face only so many “good years” before their bodies betray them and they may have to seek jobs elsewhere for stability. This show follows a group of men and women auditioning for a Broadway show's chorus line; many of whom may be at their breaking point. Each has his or her reason for being there and they are asked to reveal them one by one by the cold-hearted director Zach (played brilliantly by Matthew LaBanca). One woman, Cassie (Jennifer Knox), turns out to have intimate history with Zach as he had taken her out of the chorus to be a star when they were together. Other characters speak of their mothers and sisters and wanting to be a ballerina, but with the painful topics comes comic relief about puberty and the inability for one woman to sing on key. Monologues are strewn between the songs as the joyful is intertwined with pain. Drew Michael Gardner yanked my heart out of my chest as Paul, who tells his story about being sexually abused, homosexual, and what it finally takes for his father to call him his son. Everything culminates to the famous dance number “One” and boy was it impressive here. In such a small space everyone was on top of their game, in formation, in character, and it left me inspired.

A wonderful thing that has been eliminated from many musicals of today is the aspect of live music. The spirit and life the wonderful musicians who play for this production contribute to the enthralling feeling of sound that resonates through the audience's bodies in this small space. While it is wonderful to have such an electrifying band, they also blend well with the cast so as not to overpower the pure voices from onstage. This give and take of production effects and performers is something to be stressed. Yes, each character/actor has his or her time in the spotlight, but fitting in with the theme of a chorus, everyone has to be on the same page. Drawing focus is not the goal. The entity as a whole must hit home as a single unit. This is a tight knit unit and they accomplish just that. Their notes are sweet, their characters are poignantly portrayed, and the direction and choreography are on point. This production pays homage to a great work, sticking to the inspirational original vision, and I respect that. Seeing The Secret Theatre's version makes me feel (almost) okay with the fact that I was not alive to be able to see the original production.

(A Chorus Line plays at The Secret Theatre, 44-02 23rd Street (Long Island City), through February 14, 2016. The running time is 2 hours and 30 minutes with an intermission. Tickets were $18, available at secrettheatre.com.)