For other shows at
The Brick, visit bricktheater.com

The Beatles Present:
"The Lord of the Rings: The Musical"

Off Broadway, Musical
Ran through 10.8.16
The Brick Theater, 579 Metropolitan Avenue 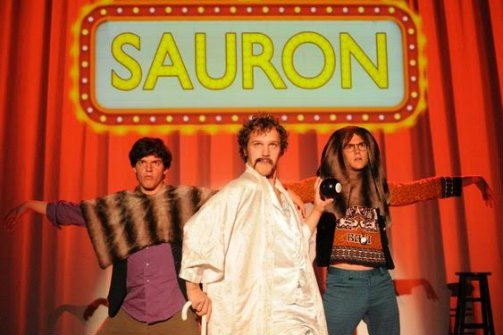 Brian Muller, Antonio Marziale, and Jimmy Nicholas in The Beatles Present: "The Lord of the Rings: The Musical."

BOTTOM LINE: Though it doesn’t always dig as deep into the world of the Beatles as it could, The Beatles Present… is an excellent performance that will make you laugh like a fool and leave you with fond memories.

Surprisingly, this new musical (in which four young men play four young Beatles playing the entire cast of characters in Tolkien’s series) is actually based on a true story. In the '60s, John Lennon, Paul McCartney, Ringo Starr, and George Harrison sent a request to great American director Stanley Kubrick asking him to produce a musical adaptation of The Lord of the Rings, with the band members playing the starring roles. This request was, of course, denied.

Sam French’s and Kyle Wilson’s musical adventure picks up at the “Beatles residence,” just before they receive the devastating news that their movie idea will not, after all, be picked up. Their discouragement only lasts a moment, though, before they realize that they can recreate the movie themselves, in their comically posh ‘60s flat, with only the things around the house, their own clothes, and each other.

Considering that we are supposed to be witnessing a musical adaptation, the very small amount of music that occurs is a bit underwhelming. There are a few catchy earworms (“Frodo’s on a quest with Samwise” as sung to “Lucy in the Sky with Diamonds," and “We are now called the Fellowship of the Ring” replaces “We all live in a yellow submarine”), and one lovely flamboyant Sauron number, but on the whole, it could have gone so much deeper. Everybody is familiar with the Beatles’ music, and between fits of laughter I found myself wishing there were more of it here.

When John (Jimmy Nicholas) and Paul (Brian Muller) suddenly realize that they have nobody to play Gollum, the miserable, scuttling pseudo-villain of the series, Yoko Ono (Jackson Perrin) barrels in mumbling about her “precious” which is, in this case, John Lennon himself. And this is the moment where The Beatles Present... truly comes together. Perrin’s commitment to this Yoko-Gollum amalgam is truly admirable, and his comedic timing is stellar. Once the entire ensemble of five (including Antonio Marziale and Carl Lundstedt as George and Ringo) is together onstage, a new rhythm sets in, everything is tightened, and the show moves more smoothly and collaboratively.

What makes this show more clever than the average parody musical are the parallels between the Beatles’ relationships and the relationships of the Tolkien characters they portray. In addition to Gollum being the Yoko of the Hobbits, there is also a charming recurring theme of thinly veiled homoeroticism between John and Paul that's reflected in their characters Frodo and Sam—in the original books, the subsequent movies, and this musical adaptation. It is absolutely delightful to learn about the way these interpretations of the Beatles relate to one another through the way they relate to each other “in character.”

The Beatles Present... is a great idea for a show, and it's done well. Delving a little deeper into the material could create a truly excellent piece of theater, but even exactly the way it is, this production is funny, performed by an incredibly talented group of young performers, and perfect for a laugh-filled (and tipsy) night on the town.

(The Beatles Present: "The Lord of the Rings: The Musical played at The Brick Theater, 579 Metropolitan Avenue, through October 8, 2016. The running time was one hour with no intermission. Performances were Thursday through Saturday at 8. Tickets were $18 and were available at bricktheater.com.)

The Beatles Present: "The Lord of the Rings: The Musical" is written and directed by Sam French and Kyle Wilson. Set Design is by Lucy Pope. Lighting Design is by Jackson Gallagher. Musical adaptation is by Eric Dietz.