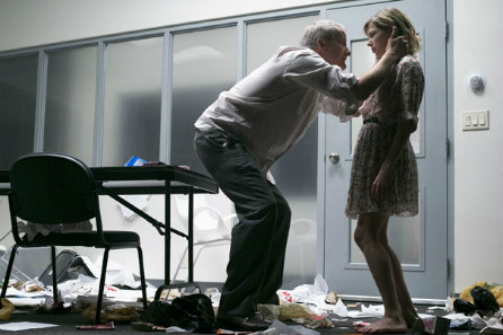 BOTTOM LINE: A starry, taut production about a sexual relationship revisited that will have audiences feeling as raw as the characters on stage.

As a culture, we have pretty fixed ideas of what abuse is and what it means to be a victim. David Harrower upends these conceits as he questions who holds the power in that pairing or whether anyone does, and asks if abuse translates into something far messier and even more uncomfortable when there are two willing participants.

It’s late afternoon when Una (Michelle Williams) turns up unexpectedly at the office where Ray (Jeff Daniels) works. He hurriedly ushers her into the conference room, a soulless office space designed by Scott Pask that’s given an extra touch of realness with employee trash strewn about the room. Angry and shocked, he tells her he doesn’t have to stay there with her or say anything and wants to move their conversation outside. Una, amused by throwing him off balance, says he pushed her into the room. She wants the door closed but Ray insists it stay open. She gets up and slams it shut. She is nonplussed, recounting with growing scorn that she tracked him down through a photo in a trade magazine left in a doctor’s office, only he’s changed his name to “Peter Trevelyan” since she knew him. She spits out this name, enraged by his efforts to create another identity for himself.  Williams commands the stage, a seething tornado of fury having arrived to unleash the mother of all confrontations while Daniels hangs back and lets her hold him and the audience captive.

It’s been 15 years since they’ve seen each other: she’d been 12 and he 40. They met at a family barbeque Una’s father had invited Ray to attend. “You were a guest in our home,” she hurls at him. She probes, asking whether he has a woman in his life and if he told her about their three months together. He says he explained that he’d had an illegal relationship. Defensive, he justifies his new life, imploring her to understand what his “three years of hell” had been like. “I had human shit thrown at me!” He insists “you know I’m not ‘like that,’” meaning not a predator or pedophile like the ones he’d read about while in prison. Like Ray, Una has carved out a semblance of an existence with a job, boyfriend and a circle of friends, but unlike him, she’s kept her name and defiantly so, and never left where she grew up. “I did your sentence for 15 years,” she tells him acidly. I lost more than you. We never moved. I was stared at, pointed at.”

They discuss that fateful initial encounter, the two retreating from anger to an almost fond reminiscence. “I saw you looking at me at the barbeque,” she begins. “I had asked you why you were so unhappy,” he recalls. Una then travels back to the last time they were together, at a motel out of town, “not asking the hard questions. I was eager to please.” Ray gently counters, his recollections altogether different. “You don’t remember what you were like. You knew more about love than I did. You were so impatient: sick of being treated like a child.” Daniels expertly inhabits a man who goes from cowed to a seeming creep, then shifts to tenderness and vulnerability. He comes across not as a villain but as a sympathetic character who can’t escape the decisions of his past. In Harrower’s hands, their confessions, their truths, their perceptions, alter the balance between the two of them again and again until neither has an upper hand.

With the barest of sets and all of the action confined to one room, Harrower and director Joe Mantello have crafted a gripping, tense drama unfolding in real time that doesn’t indulge any wasted moments. They let the actors and the dialogue do all the heavy lifting and they do so without judgment, leaving the audience to decide if they are sickened, moved, saddened or all of the above. It’s easy to understand how the subject matter has struck a nerve, the play having been performed in over 40 productions around the world since its premiere in 2005 (it first arrived in New York in an off Broadway production at Manhattan Theatre Club in 2007 starring Jeff Daniels and Allison Pill). Blackbird is a gripping portrait of a taboo love story done with unflinching honesty that is brutal and unforgettable.

The cast is Jeff Daniels and Michelle Williams.