$10 for seniors, students, members of the military 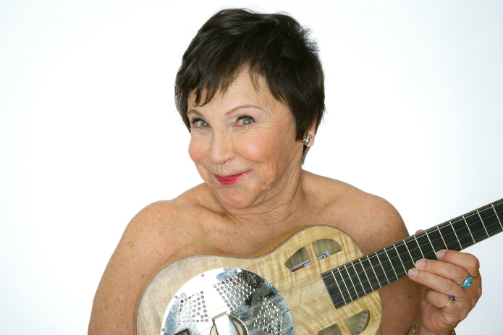 BOTTOM LINE: An irreverent, sexually-charged, and charming reflection on a six decade career as an internationally-acclaimed singer and comedian.

Actor D’yan Forest calls her one-woman show, A Broad Abroad, a reflection on “men, madness, and foreign affairs.” She means the latter phrase literally. Throughout the course of her one hour performance, Forest conjures a host of male suitors, from a Syrian 25-year-old she met in a Turkish bathhouse, to a sexually lackluster ex-husband. Humor abounds as the now 81-year-old chanteuse reminisces, in song and monologues, about a six-decade career that has included stints in Paris cafes and in venues ranging from the seedy to the spectacular.

And did I mention that there have been men, lots and lots of men, in every nook-and-cranny of her fascinating and flamboyant life?

Throughout the play, Forest and her long-time keyboard accompanist, Richard Danley, present a dozen songs—some of them favorites from decades back including Hello Dolly, La Vie en Rose, Is That All There Is, and Don’t Tell Mama—and solicit audience participation. Since there is no set—it’s just Forest, her pianist, a ukulele that she periodically picks up and plays, and a few jackets that she changes in and out of—all eyes are on Forest as she shares sexual intimacies and anecdotes. Some of the dialogue is predictable, including self-deprecating comments about growing older; at the same time, Forest subtly reminds the audience that she’s nobody’s fool. Sassy, outspoken, and profane, she steers clear of politics, opting instead to focus on her professional and romantic life. Nonetheless, A Broad Abroad offers a bold challenge to monogamy and the imperative of marriage, notions that were pervasive as she came-of-age. As is probably obvious, she makes no bones about scandalizing her family with her refusal to comply.

A Broad Abroad is directed by Eric Kornfeld.