You On The Moors Now 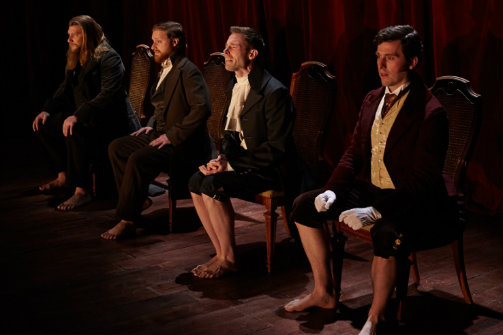 Harlan Alford, Nathaniel Basch-Gould, Preston Martin and John Riddleberger in You On the Moors Now. Photo by Suzi Sadler.

BOTTOM LINE: A wild ride through the dark underbelly of four classic novels, this is theatre for the academically inclined.

Theater Reconstruction Ensemble’s You On The Moors Now contains moments of broad comedy, touching simplicity, and mind-bending originality. However, this wildly ambitious piece left me asking, “Who is this play for?” The short answer: people with an extensive knowledge of 19th-century lit, and a lot of patience.

The script, by Jaclyn Backhaus, creates a universe in which the heroines and various supporting characters from four classic novels come together. The plots of Jane Eyre, Wuthering Heights, Pride and Prejudice and Little Women are torn apart and reconfigured as Jane, Catherine Earnshaw, Lizzy Bennett and Jo March join together to escape the restrictive social codes of their time, rebelling even further than they originally did in their respective stories. All boundaries of time and space are blithely ignored as the four women attempt to elude capture at the hands of the amorous men they have rejected: they may be wearing period costume (at least, they start out that way), but somehow, radio communication and space travel are also possible.

If you don’t come in knowing the plots of the four novels well, you will quite possibly be very confused by the action on stage. The effectiveness of the piece depends on knowing how the original texts are being adhered to or departed from; otherwise it’s just madcap strangeness. The script does take time to explain relationships and plot points, but that works better as a refresher rather than a primer. (There are also synopses in the program, which, of course, only help if the audience reads them.)

Having been an English major/middle school teacher in another life, this wasn’t a problem for me; however, I found myself being distracted by other things, like the fact that two of the novels have nothing whatever to do with moors, and that Jo March’s costume was totally wrong for the period. I wondered why Catherine Earnshaw (the lovely Anastasia Olowin) was directed to play her scenes for “realism” (or as close as this play gets) while Mr. Darcy (Preston Martin) is played as a broad comic caricature. These may seem like quibbles, but when you create a play that is bound to draw in literature nerds, you must prepare for nerd-level scrutiny.

Happily, this complex piece is performed by an exceptional ensemble. Director John Kurzynowski has done excellent work with his cast of fourteen, all of whom meet the challenges of the text head on. If you are the type to have read Wuthering Heights five times or have watched every film and TV adaptation of Pride and Prejudice, you will likely find You On The Moors Now to be amusing, provocative and poignant. It may send you back to the novels that inspired it with new insights or renewed affection, or, quite probably, both.