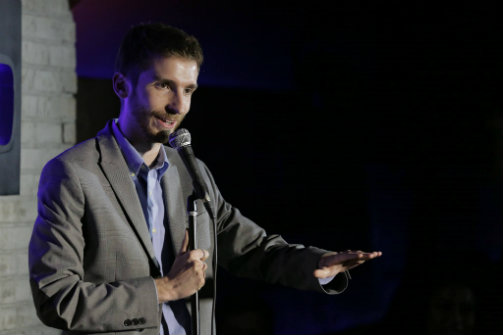 Mike Lemme in Where I'm From. Photo by Patrick Holbert.

BOTTOM LINE: In this stand-up comedy show Mike Lemme finds wry humor in his dysfunctional family and his struggles in New York City, soliciting much laughter from the audience and proving himself to be a comedian of significant talent.

“Sometimes crying or laughing are the only options left, and laughing feels better right now,” said writer Veronica Roth about laughing over the tragedies in life. This idea certainly seems to be present in the stand-up comedy show Where I’m From, in which performer Mike Lemme plumbs the dark stories of his childhood spent with a mentally ill mother in a small town in Massachusetts and tries to transform them into comedic material. Some of the jokes work better than others, but transforming the suicide attempts of one’s manic depressive mother is surely a daunting task for anyone. (“She taught me not to give up on my goals: she tried to kill herself five times,” Lemme jokes).

For someone new to stand-up comedy (as he claims to be) Lemme has a lot of obvious talent. His energy and infectious charisma lights up the room as he worked the crowd and sardonically flirted with female audience members, asking if they liked air mattresses. His confidence and self possession make him a natural performer who is able to maintain an audience’s attention even when not every joke is a hit with the audience.

While the stories of his dysfunctional family are what the show is advertised as focusing on, Lemme is at his best when he strays away from his heartbreaking stories about his mother and when he quips about the struggles of being a broke comedian in New York City. “When I was a kid I wanted to eat pizza whenever I wanted, and now I do, I’m living the dream. I reached my goal. Only now I have to eat pizza every day, even when I don’t want to,” he jokes. (Lemme said during the show that much of his material is riffed, so each show ends up being different in its focus, and other performances gave more focus to his family’s skeletons).

Lemme’s tales of his dysfunctional family tree include his emotionally unavailable dad who expresses his love through buying groceries, but rarely says anything of emotional significance directly. “He said I love you by buying me ice cream. Which is better than saying I love you, because I love you doesn’t have any nutrients in it. Then again, neither does ice cream,” says Lemme. I am sure with some tightening and refining Lemme will have a fantastic show on his hands. He already shows that he has quite a knack for soliciting laughter from an audience, even a sober audience at 2pm on a Saturday afternoon. I hope to see Lemme again at some of the stand-up comedy shows around the city, as he certainly solicited more laughter from me than most of the acts I’ve seen in comedy clubs. Lemme’s jokes might not always work, but when they do they’re golden.