By William Shakespeare; Directed by Michael Sexton
Produced the Pearl Theatre Company, in association with the Shakespeare Society 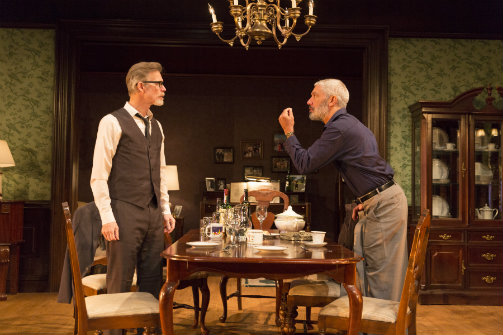 BOTTOM LINE: This Winter’s Tale is appropriately emotional and funny, an overall satisfying interpretation of one of Shakespeare’s later plays.

“A sad tale's best for winter”

In case Winter’s Tale is a new Shakespeare to you (it isn’t done as often as Midsummer or Hamlet), the tale begins in the kingdom of Sicilia, with King Leontes and his wife Hermione, hosting many house guests including their friend Polixenes, king of Bohemia, in their home. Hermione is quickly able to convince Polixenes to stay, which Leontes assumes means she is having an affair with him, and the child Hermione is pregnant with is not his own. He charges Hermione with adultery and sends her to jail, setting off a domino effect of bad things, including the death of their son, and Hermione, and the banishing of the newborn daughter once she is born.

Jolly Abraham and Peter Francis James, as Hermione and Leontes, lead the company with wonderful performances. Both have strong stage presence and a keen grasp of Shakespearean text. They bring appropriate emotion to the tragic story.

Corey Whelihan (performing Polixenes at the performance reviewed), Tom Nelis (as Camilo), Rachel Botchan (as Paulina) all gave strong and committed performances. The second half (the latter two acts) of The Winter’s Tale are more comedic. The story shifts to the island of Bohemia, where Perdita (played by Imani Jade Powers) was sent as an infant.

Perdita is rescued by a shepherd (Dominic Cuskern) and his son (Adam Green.) They are both delightful and bring a fresh look to the humor in these acts. Another highlight of Bohemia is Steve Cuiffo, who is absolutely hilarious as busker/peddler Autolycus.

Things get a little sticky in the second half with double casting of James Udom as both Mamilius, son of Hermione and Leontes, and later, Florizel, son-in-law of the same. There must have been a better way to cast the child rather than confusing the audience by bringing back the same character whose death is crucial to the plot in the first half, in another pivotal role in the second. (I didn’t mind the cartoon pajamas and cape used to costume Udom as the child, but having him later play Perdita’s fiancé just didn’t work.)

Sexton does a smooth job bringing our characters back to Sicilia and tying up the loose ends of the plot, back in the living room, with only minor confusion with the doubling of characters.

Brett J. Banakis (also currently represented off Broadway with Big Love) created the beautiful multifunctional set. In the first half of the play as the tragedy is set up, the action takes place in an elegant living/dining room. The second half of the play (in Bohemia), occurs in the same space, but the set is deconstructed with furniture removed and overturned to suggest the island. (It reminded me of the creative scenic design in Fiasco’s Into the Woods.)

Bradley King is responsible for the remarkable lighting design, which appropriately changes to represent new tone, location, and passage of time.

Overall, Pearl has mounted a production of the tricky Winter’s Tale to be proud of.