Conceived and Directed by Erin B. Mee; Scenes by Charles Mee & Jessie Bear; Choreography by Jonathan Matthews
Produced by This Is Not A Theatre Company

Off Off Broadway, Immersive Theatre
Runs through 11.20.15
Undisclosed NYC apartment 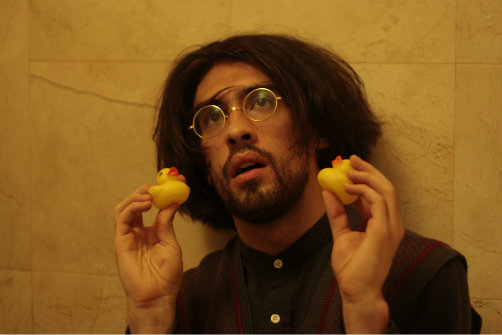 BOTTOM LINE: Be a guest at a very exclusive invite-only party (spanakopita and pretzels included).

One of the great things about any immersive theatre experience is that it immediately throws you into a situation where your senses are heightened and every experience is suddenly called into question—is that part of the show? Is that an actor? Is that supposed to be happening? This Is Not a Theatre Company’s (TINATC) new production, Versailles 2015, does exactly this in a delightful and provocative manner.

24 hours prior to the performance, audience members are emailed the address to an apartment where we are to attend a party hosted by TINATC’s founder and co-artistic director Erin B. Mee (played by Mee herself). It seems as if the party is an opportunity to view TINATC’s commission of a bathtub dance piece, also entitled Versailles 2015, by choreographer-dancer Jonathan Matthews (the incredibly agile, focused, goofy and death-defying—bathtubs are slippery, after all—Matthews, playing himself). Greeted in the lobby by Erin’s “niece,” Judy (Caitlin Goldie), the rules of the party are explained—only a few party-goers at a time will be able to fit into her aunt’s bathroom to watch the dance piece, but there are some snacks and beverages to nosh on while we wait our turn; shoes will be left at the door (hospital fabric booties are provided for anyone who’d like them); and this is not Sleep No More, so please refrain from opening up any drawers or rifling through her aunt’s stuff.

We are then brought up in an elevator and, after shedding our shoes, enter the apartment where the party is already in progress. It’s a huge credit to all involved how effective this first “scene” is. While some audience members may be gung-ho to jump into any type of experience, many may be resistant and nervous and, from the moment we enter, we are made to feel welcome and comfortable. Though I was fully aware of the artifice of the party, it genuinely felt like many NYC parties I’ve attended and I found myself, as did the other audience members, relaxing into the situation and making the usual get-to-know-you small talk, unsure of whether or not I was talking to a genuine guest or an actor playing a guest. In fact, I actually was duped and had a lovely conversation with a guest that I did not realize until later was actually an actress in the piece. But the fact that this amused rather than annoyed me speaks directly to the ingratiating tone of the overall piece itself.

As we wait to be brought into the bathroom, we are also masterfully spirited away and divided into smaller groups of 4 or 5 to witness additional moments in the other rooms of the apartment: a rant on the unifying powers of gourmet food (in the kitchen); a discussion about the history of the neighborhood where the apartment sits as well as the preponderance of plays set in living rooms (knowingly and ironically taking place in the living room); a saga of the near death of an English bulldog (in the bedroom). Simultaneously, videographer Stefan Hartmann’s collected footage of global crises streams unobtrusively on a TV or iPad screen casually left on in the various rooms.

This juxtaposition of images of struggling refugees and angry demonstrations alongside the innocuous minutiae that the characters obsess over points to the overall theme of the evening (as does the play’s and the performance-piece-within-the-play’s title, directly referencing the opulence of Louis XIV and a life of excess). But Charles Mee and Jessie Bear’s script does not go the obvious route of simply mocking these partygoers and their 1% lives—we are meant to connect with them, for it is very recognizably our lives as well (the play’s final argument is that anyone working in the arts or able to take the time to spend an evening seeing theatre is living a privileged life…and we are). The text runs a seamless line between the exquisite poetry and mind-numbing humdrumness of our often devastatingly mundane lives and is often so heavy-handed in its heavy-handedness that it lulls rather than grates.

Ms. Mee’s cast of charming young actors appealingly rides this line beautifully. They effortlessly deliver the moments of heightened language while making it appear improvisational and natural. They all seem like people I know. It’s a credit to the direction and performances that as much as we may want to roll our eyes at their superficiality, we don’t. We smile and recognize them. They work seamlessly as an ensemble, even when performing solo in a kitchen or bathroom, and are so at ease in the contradiction of their roles as party-goers and actors that I half expected them to continue exiting with us as we descended back in the elevator and out into the lobby at the play’s end.

The evening is best summed up by Goldie’s lovingly shallow Judy as she stares at her reflection in a mirror and reveals an aching depth, disclosing, “If my world never gets bigger than this, than me sitting in this bathroom and plucking my eyebrows, that would be just fine, just a-ok with me, that would actually be perfection. Because I’m a person right now, at this moment. I am a person sitting in a bathroom and that’s really, really all I want in the world.” Amidst the countless atrocities that confront us every day, at our core we are all struggling to find the naked honesty in our own lives—the person staring back at us from our bathroom mirror and to be “a-ok.” Versailles 2015 allows us the time to contemplate this in its characters and in ourselves.