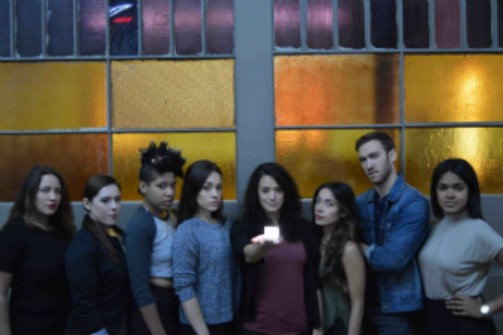 The cast of Untameable.

BOTTOM LINE: Settings and stories artfully collide in this immersive saga of love, intrigue, and diamonds.

From the moment we receive our boarding-pass-inspired programs, Highly Impractical Theatre and The Unsoft War’s Untameable neatly folds the audience into its world, taking us on a literal journey through a tale of thwarted love and high-stakes crime.

Staged in the re-purposed church building of St. Paul’s Hall, Untameable’s pre-show foyer becomes an airport terminal from which wild, charismatic Nel (Vicki Rodriguez) and cagey Jym (John Racioppo) emerge. As we hush to overhear their dialogue, we learn that the two are members of The Turin School, a notorious diamond-theft ring bent on “liberating” famous stones from the museums of former colonial powers and returning them to their countries of origin. Fresh out of hiding, Nel’s headed to Argentina for her biggest heist to date: the theft of a legendary diamond from Buenos Aires’ MAFM Museum during its opening gala. Once Turin’s getaway driver, Jym is eager to put his criminal past behind him, but Nel persuades him—and us—to join Turin for one final, epic mission.

The audience follows the pair into an anteroom, in which we learn, via a beautifully-rendered dance sequence, the legend of the diamond: long ago, a Lady Queen (Ian F. Stewart) came to the kingdom of a Boy Prince (Nikita Chaudhry) to obtain his country’s most famous gem, but fell in love with him in the process. When the equally-lovestruck Prince learned her true purpose, he sent the Queen away, but she returned to conquer his land and claim the diamond for herself. This tale proves an apt metaphor for the events to come, and its themes of love and betrayal echo throughout as Stewart and Chaudhry hover at Untameable’s peripheries, intercutting scenes with graceful, silent vignettes of the Prince and Queen’s doomed courtship.

Untameable’s action then splits between parallel scenes and locations. Through Jonathan Cottle’s spare, inventive set design, the church hall becomes the MAFM office from which museum director Majo (Stacy Salvette) and head of security Belen (Nancy Ellen Reinstein) plan to protect the jewel with help from diamond specialist Cabel (Annie-Sage Whitehurst) and Astrid (J. Moliére), a thief-turned-vigilante-guard. Meanwhile, the space’s industrial kitchen becomes La Acadé, the secluded lair from which Jym and fellow Turin members SamTam (Denise Yolén) and Mina (Irene Rivera) plot the impending heist. Connected only by the anteroom, many of the museum and lair scenes run simultaneously, so audience members may overhear snippets of dialogue from the next room or opt to travel between spaces for a different take on the events.

The story unfolds to reveal a web of interpersonal drama as intricate as the criminal plot surrounding it. We discover that Nel has romantic entanglements on both sides of the operation: Cabel, her jilted fiancée, has traveled to Buenos Aires to transport and appraise the diamond, while current flame Mina functions as Turin’s local connection. Jym wants his girlfriend SamTam to abandon her life of crime and settle down with him; she wants him to step into his full potential as a fellow thief. Rumors of a mole pepper the discussions of museum staff and Turin team alike: is ex-lover Cabel the insider of which Nel speaks, or is ex-con Astrid the traitor amidst MAFM’s forces? Agendas, alliances, and boundaries seem as fluid as those of the space itself, and we must literally stay on our toes to keep up.

Untameable’s choose-your-own-path setup works extremely well for the show’s stylistic and thematic purposes, but it can at times breed confusion as audience members scramble to piece together the bits of information we receive. That said, I was thoroughly impressed with Elana McKelahan’s direction, and commend her seamless orchestration of the show’s various moving parts. Multifaceted as diamonds and complex and daring as a heist, Untameable is an adventure well worth joining.