Conceived and Directed by Richard Humphrey
Produced by THE RIDE 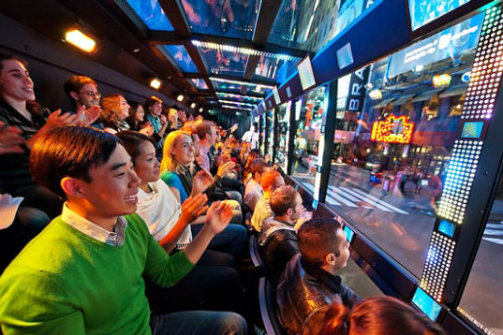 The most recent addition to the experiences offered by the folks at The Ride, The Tour is exactly what it sounds like: a 90-minute bus tour of central Manhattan that includes 42nd Street, Lincoln Center, Central Park, and Macy’s. Instead of hoofing it, you ride in air-conditioned splendor in a custom-designed vehicle; instead of relying on a guidebook or your smartphone, you get all the facts and stories from a friendly “navigator” and the bus itself. Yes, the bus talks.

The original Ride was an amusing variation on the standard NYC bus tour that turned the experience into a show: actors in character both on the bus itself and on the streets outside, appearing as if by magic or coincidence to highlight the history or culture of the city. The “audience” was seated facing sideways and looking out of a giant window, with video, audio, and the voice of the Ride itself enhancing the action. It was hard not to be impressed by the organizational skill that kept the whole thing working.

The Tour removes much of what made The Ride unique and gets back to basics: a cheerful guide giving us the skinny on why the West 50s are called Hell’s Kitchen, who used to live in the famous Ansonia Building, and so on. The bus also chimes in from time to time.

What does The Tour have that your average double-decker tour bus doesn’t? Video screens, better views, and full protection from the elements. It also confines itself to a much smaller area, starting and ending just off Times Square. For those who are tired of walking and want a more comfortable way to see the sights in the heart of Manhattan, The Tour is the posh alternative. And if you can’t get enough of a talking bus, those who take The Tour get a discount on The Ride!

(The Tour leaves three times daily from 45th Street and Broadway, outside the Marriott Marquis hotel. Departure times are 12PM, 2PM, and 4PM. Tickets are $45 for adults, $35 for children and are available at thetournyc.com or by calling 212.221.0853.)