By Mark Gerrard; Directed by Cynthia Nixon
Produced by The New Group 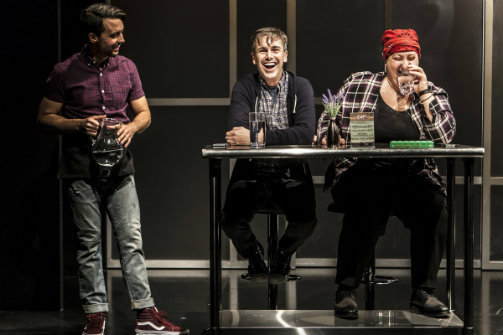 BOTTOM LINE: There are plenty of laughs in Steve, especially for musical theater fans, but the emotional arc isn't always compelling.

About twenty minutes before the start of Steve, Malcolm Gets plays showtunes on the piano. He is soon joined by other members of the cast, who sing along to numbers like "All That Jazz" and "Together (Wherever We Go)." If this sounds appealing to you, you will no doubt enjoy Steve, which seems written for frequenters of cabaret bars who speak in Sondheim quotes.

But this play is not all fun and songs and theater references. Steven (Matt McGrath) and Stephen (Gets) seem to have picture-perfect lives, but at Steven's birthday dinner, he reveals that he caught their son with Stephen's phone, full of sexts from another man. It's exciting that we live in a time when plays about gay people don't have to deal with homophobia and AIDS and can depict the same (boring) problems as straight people, but it's hard to feel that sorry for the characters and their cushy lives and their self-inflicted problems, especially since what's going on in Steven's best friend Carrie's (Ashlie Atkinson) life is far worse—she's dying. Meanwhile, Steven's other best friend Matt (Mario Cantone) and his partner Brian (Jerry Dixon) are preoccupied with their hot physical trainer and Steven starts to constantly run into Esteban (Francisco Pryor Garat), the attractive Argentine waiter at his birthday dinner.

Even when it's difficult to feel emotionally invested, it's always entertaining to watch the members of the cast interact with each other and interpret Mark Gerrard's snappy dialogue. As directed by Cynthia Nixon, they are believable as a group with a history. Gerrard has a knack for writing musical theater jokes that don't feel tired. There is even some skewering of recent Broadway shows. Also, either he has spent time in Argentina or he has done his research because Esteban's "Castellano" was impressively authentic, peppered with slang terms like "obvio" and "dale." When the characters speak in Spanish, the translations are shown on sleek projections designed by Olivia Sebesky, as are the text messages. And hey, there probably aren't any other Off-Broadway shows with graphic sexts shown on the screen.

Steve is written by Mark Gerrard and directed by Cynthia Nixon. Scenic Design is by Allen Moyer. Costume Design is by Tom Broecker. Lighting Design is by Eric Southern. South Design is by David Van Tiegham. Projection Design is by Olivia Sebeksy. Music Coordinator is Seth Rudetsky. Production Supervisor is PRF Productions. Productions Stage Manager is Valerie A. Peterson. Casting is by Judy Henderson, CSA.