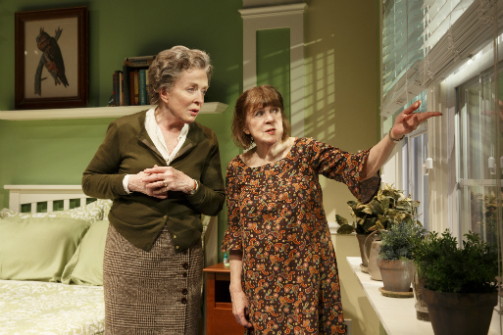 First impressions speak volumes. Even before someone opens his or her mouth to utter a single syllable our brains have already collected a wealth of information from clothing choices and facial expressions to what items they keep in their possession. Our gut has a say about all the data our brain collects and it can be difficult to change another person's opinion of us once initial perceptions are gathered. Director David Hyde Pierce and scenic designer Alexander Dodge excellently present us with our first impressions of Marilyn Dunne (Marylouise Burke) and Abby Binder (Holland Taylor) even before they set foot onstage.

Two spaces in the same room evoke extremely different judgments. First, there is the bed closest to the window with books neatly aligned on a shelf. The linens are all tucked in and the plants on the windowsill are healthy and well manicured. Next to that area is an unmade bed with photographs and a child's painting littering the wall. Some inferences are accurate, allowing us to trust our gut, but things are not always what they seem. Especially with these two quirky ladies.

Abby is the woman with the neat bed and the absence of any personal mementos. She is a grouch, always scowling, sitting in her sunny room in this assisted living facility. Unfortunately she doesn't have the money for her own room, but she does seem to drive away all of her potential roommates. Nothing seems to scare Abby, but Marilyn is not so easy to get rid of. She loves the view of the park from the room's window and has no intention of leaving. Nothing makes her angry as she goes for walks in the park, takes part in the home's daily activities, and jokes with Scotty (Nate Miller), one of the workers at the facility who checks in on them regularly.

The two clashing women come to an agreement, a ridiculous bet where if Abby wins Marilyn moves to another room and if Marilyn wins she gets the bed by the window. Desperate times call for desperate measures. The wager? Abby will be victorious if she makes Marilyn mad, whereas Marilyn wins if she is successful in scaring Abby. Their antics cause quite a ruckus as family members are quickly brought into the warped game. How far is too far, though? Craigslist, mace, parachutes, and drugs all play their part in these heinous “pranks.”

Burke and Taylor are tremendous in their roles. I roared with laughter along with the rest of the audience. The humor that Lindsay-Abaire writes is thoughtful and intelligent. Somehow he manages to take dark and serious themes and turn them into peculiarly amusing situations. This epic battle is supported by a very strong ensemble. Rachel Dratch and Daoud Heidami are dynamic additions, playing Marilyn's daughter and son-in-law. Their screwball personalities with Glenn Fitzgerald and Nate Miller also thrown in the mix builds up the show into a crazy ordeal. It is inappropriate and wonderful.