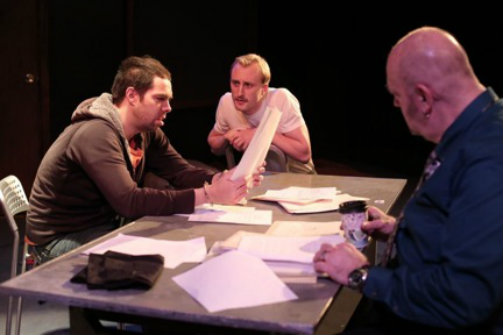 Presented by humble means, The Seeing Place Theater’s production of The Pillowman makes up with raw, memorable performances from its central characters, for what it lacks in production value. Initially, it’s a challenge to overlook the sparse, rather dated theatre surroundings of the Clarion Theatre, located in the heart of Kips Bay. However, it’s almost startling how effective the performances given by Brandon Walker, Logan Keeler, and Daniel Michael Perez are in whisking you away from a small black box theater, to smack-dab in a grim and menacing interrogation room.

The Pillowman is a theatrical gem, classified by many as “horror-comedy.” Over the course of its roughly two hour run time, audiences observe a man brought into custody by two officers laying the law for an unnamed totalitarian dictatorship. We learn that the man’s name is Katurian (Brandon Walker), and he is accompanied in another holding cell by his mentally handicapped brother, Michal (Daniel Michael Perez). Our two police officers, Tupolski (John D'Arcangelo) and Ariel (Logan Keeler) proceed to question Katurian about a string of recent murders in the community, all with children as their victims. It appears that life is imitating art, as the murders have all been carried out in the same exact way in which the ill-fated children in Katurian’s twisted fairy tales are brought to life.

Tupolski and Ariel begin the piece playing into the preverbal labels of good cop and bad cop, respectively. However, those lines begin to cross as the investigations into the murders bring out emotional baggage carried by both officers. Keeler’s performance as Ariel is particularly memorable, presenting us with a man tortured by the memories of his father. At first violent, unreasonable, and the human version of a ticking time bomb, the empathy Ariel shows for Katurian is palpable by the play’s conclusion.

Alternating between interrogation, retellings of Katurian’s fairy tales brought to life (albeit rather awkwardly by the contemporary equivalent of a Greek Chorus), and tender scenes between Katurian and Michal, The Pillowman builds to an unforeseen act one conclusion. Not knowing the piece prior, I was pleasantly, and genuinely, taken back.

That speaks to the piece in general, really. The Pillowman is a play riddled with surprises and dark twists. Fans of the macabre will certainly get their money’s worth (ignoring the fact that they are only paying fifteen dollars to begin with). Playwright Martin McDonagh has crafted a tale of fear, familiar horror, sadism, paranoia, violence breeding violence, and the effects of creative expression in society. However, it’s the story’s more relevant themes of police corruption and human rights that co-directors Brandon Walker and Erin Cronican really help to resonate in audience members. This piece runs in rep with Johanna Adams' Gidion’s Knot—a play dealing with the same theme of how storytellers are dealt with by fearful authorities. Given the political and social climate of the world at the time of writing this review, it’s a fantastic introspective into the social plight of police brutality experienced by many minorities today.

What didn't work for me in this production was the use of ancillary storytelling characters: Father, Mother, and Girl (Charles Baran, Olivia Baseman, and Brisa Freitas respectively). I can’t help but shake the feeling that their use is grossly abused in this production. At times they pull attention from intimate moments, reacting melodramatically during moments that don’t require extra emotional punctuation. Conversely, their vague reactions in other scenes suggest ambiguity, and not the good kind. There are even moments where their physical presence almost interferes with the other actors' abilities to move around on the stage. It’s understood that on the most basic level, these characters function to illustrate Katurian’s stories and further demonstrate moments not experienced by the central characters. However, beyond existing as mere plot devices, it's not entirely clear why else they exist.

The Seeing Place Theatre’s production of The Pillowman is overall a true delight. Not for the casual theatregoer, it’s certainly a choice for audience members seeking a little horror with their theatrical entertainment. At almost the same price as a movie ticket, skip the big screen in favor of this deranged work of art.