$12 for students, seniors, and veterans 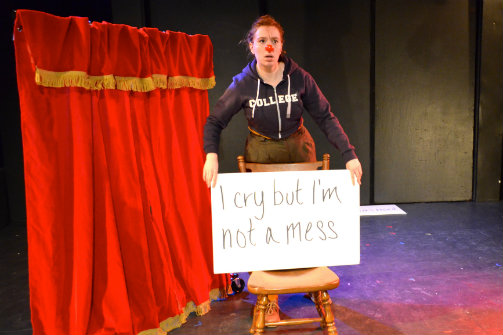 Can sexual assault be funny? As one character in Antonia Lassar’s Post Traumatic Super Delightful points out, laughter “means connection with someone.” What better way, then, to cope with the lingering anguish of rape than finding a way to collectively laugh about it?

Lassar’s solo show, now playing at the Kraine Theater as part of the aptly named Frigid New York Festival, opens with a series of fart noises interrupting a tormented confession from a survivor. The scene invites you to laugh -- in fact it dares you not to -- just as the play later invites you to sympathize with an alleged rapist. As we follow several characters’ accounts of an incident on a college campus, the gray area between sexual violence and its effects on a community achieves a lively array of theatrical colors. Lassar, a gifted physical comedian and incisive feminist-playwright, isn’t afraid to upend our perceptions of how assault reverberates for survivors, perpetrators, and bystanders alike.

Curiously, Lassar embodies the offender, as well as the professor and Title IX coordinator on either side of his appeal process, but we never hear directly from the survivor herself. For that perspective, we must squint through the fractured play-within-a-play featuring an affably inept clown armed with a red nose, several pithy notecards, and Destiny’s Child. Director Angela Dumlao hones Lassar’s every comedic beat into an astonishingly expressive pantomime that both investigates the issue at hand and has the audience in stitches. The intimate conclusion, a demonstration of music’s restorative power, will tug at your heartstrings.

Post Traumatic Super Delightful is a play that demands to be heard at schools, crisis centers, and theatres across the country. Lassar knows the sexual assault crisis on today’s campuses won’t be easily solved; the belief in live theatre’s ability to enlighten and heal is what fuels her superbly astute show.

(Post Traumatic Super Delightful plays at plays at The Kraine Theater, 85 East 4th Street, through March 6, 2015. Remaining performances are Wednesday 3/4 at 5:30PM; and Friday 3/6 at 8:30PM. Tickets are $16, $12 for students, seniors, and veterans. For tickets and more information visit ptsdtheplay.com or horsetrade.info.)