By Noah Casey; Directed by Matt Clarke and Ben Sloane
Produced by If You Can't Beat 'Em Productions
Part of the 2015 Frigid New York Festival

Off Off Broadway, New Play
Ran through 3.3.15
The Kraine Theatre, 85 East 4th Street 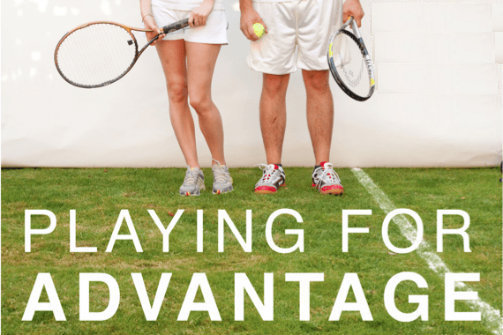 BOTTOM LINE: This new play likens love to a tennis match and offers a tutorial on how to destroy a relationship.

If you've been looking for a blow-by-blow account of a failed relationship from pick-up to break-up, go see Playing for Advantage by Noah Casey. The play is a two-hander that features Casey and Kirsten Kilburn as they walk us through their relationship from first meeting to calling it quits. The two actors talk directly to the audience as though to offer instruction on how to begin a relationship, develop it, and maintain the upper hand throughout.

The struggle of a relationship is presented as a tennis match. The central conceit is quite clever and successfully unifies the production. The actors wear tennis whites that function as a neutral costume for every occasion from fancy dinners to bedroom intimacy. A score board keeps the audience abreast of who’s winning. The most clever part of the production is a ball girl (Safia Karasick-Southey) who keeps running across the stage to deliver and strike hand props, like cell phones and wine glasses. This makes for smooth and seamless transitions, while furthering the central metaphor.

The metaphor does eventually grow confusing, however. The points that the characters keep racking up seem subjective and unconnected to the action. A tennis match is inherently adversarial, and therefore, I find it difficult to accept as a fruitful metaphor for a love story. The characters disagree about almost everything and constantly contradict each other, yet they claim to be in love. At no point did I feel as though these two were meant to be together.

When a play presents material in such an instructive manner, the audience expects to acquire wisdom and learn something. Ultimately, this is a relationship that ends in ruin, and so the only wisdom I could glean is how not to treat your relationship like a tennis match. I'm no guru, but even I know that if you treat love as a perpetual competition, you're probably never going to score.

(Playing for Advantage played at the Kraine Theatre, 85 East 4th Street, through March 3, 2015. For tickets and information about other shows in the Frigid New York Festival, visit horsetrade.info.)