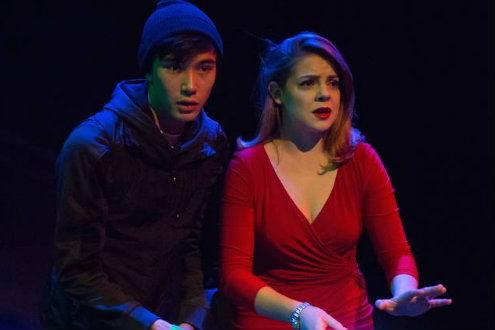 BOTTOM LINE: For a play about dimensions, it's all a little thin.

It's difficult not to compare Jennifer Haley's Neighborhood 3: Requisition of Doom to The Nether, which had its New York premiere at MCC in February. Both plays explore the dangers and appeal of simulated reality. Neighborhood 3 is actually the older of the two, having debuted in 2008 at the Humana Festival. That explains why The Nether, in which a pedophile creates a virtual reality to act out his disturbing desires without hurting actual children, feels more sophisticated. Neighborhood 3 seems born out of the idea that first-person shooter games desensitize teens to violence in real life, an idea that is not as original, nor is the play as successful at establishing two fully realized worlds.

In Neighborhood 3, there is a real neighborhood and a video game version. The teenagers spend their days in their comfortable houses with neatly cut lawns obsessively playing a zombie shooting game that uses GPS to model the actual street plans of the area. Haley wrote it for four actors, but here there are 17. For the most part, each scene introduces new characters, and the large cast suits the play. With each interaction, we get to know more details about the effects the game is having on each family. Because it is more about the community as a whole than individual characters, it doesn't hurt the play that we spend such little time with each person. The actors, all part of The Flea's resident troupe The Bats, vary in effectiveness, but Connor Johnston and Sydney Blaxill are particularly memorable in their scene together—he as a believable gaming teen and she as a worried, confused mother.

That scene is the only one that takes place within the game, and though it's an accurate portrayal, it also reveals a major problem. As the lines between real life and the game start to blur, the logistics of how things can happen in both realities start to feel muddled. For example, there is talk of a wormhole that isn't fully fleshed out.

Strong direction might have helped smooth over the weaker elements, but Joel Schumacher, known for blockbuster movies like Batman Forever, isn't up to the task in his New York directing debut. He does seem like a smart choice for this suspenseful and cinematic piece, but it's unclear whether the tone he is going for is campy or serious. Like many of his movies, it could go either way.

(Neighborhood 3: Requisition of Doom plays at the Flea Theater, 41 White Street, through December 20. The show runs 70 minutes, no intermission. Performances are Wednesdays through Mondays at 7. Tickets are $15-$105 and are available at www.theflea.org or by calling 866.811.4111.)