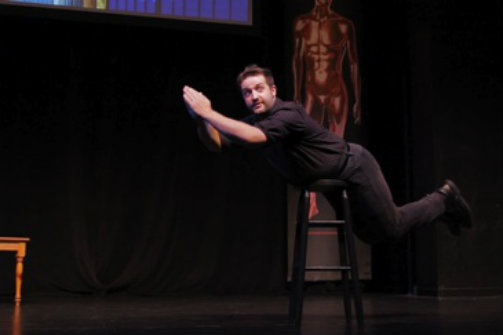 Peter Story in Men are from Mars, Women are from Venus Live!. Photo by Joe Trentacosta.

When it comes to the world of self-help books, particularly in the field of dating and relationships, any casual reader is at least familiar with John Gray’s Men are from Mars, Women are from Venus. Published in 1992, Gray sensationalized the world by presenting a one-stop-shop on the ins and outs of how relationships thrive. Fast forward a little over twenty years and you have Men are from Mars, Women are From Venus Live! —a one-man production adapted by Eric Coble, currently running at New World Stages.

Men are from Mars, Women are from Venus Live! forms a loose agenda to the evening by alternating between intellectual explorations into topics like how men and women differ in how the chemicals in their brain motivate their responses to conflict, our innate desire to “keep score” in relationships, a breakdown of the two most important requirements from our respective partners, and other useful demonstrations; the lessons learned are applied to the personal life and experiences of Peter Story, the show's narrator. Story hits the stage running, or should I say, dancing. He brings with him an incredibly high level of energy, remaining consistently engaged over the course of the evening.

Initially Story comes off like a hokey motivational speaker, but eases into being an incredibly relatable guy. Adapter Coble ties together lessons pulled directly from Gray’s book with charming anecdotes about learning to be a better husband, father, and lover. This allows Story to break the fourth wall and transform the structure of the production from that of an audience watching an actor perform into an easy-going and candid conversation. Story's own life (albeit sometimes a fictionalized version), including his experience growing up in rural Oklahoma, serves as the springboard for many of the jokes, and the result is, overall, very successful. While the jokes aren’t all necessarily new, the way in which Story commits his entire body in delivering them results in many full-belly laughs. Story's mannerisms remind me at times of a more likable and energetic Patton Oswalt. Thankfully there wasn’t much audience participation; instead Story maintains focus on himself. While the emphasis on the show is comedy, Story does a good job of reeling us back in with more tender moments—offering stories like the one in which he tells us the exact moment he realized he was in love with his wife.

While the performance is able to keep audiences engaged over the course of its roughly two-hour run, the ultimate end goal seems a little muddled. Once you accept that Men are From Mars… is less play and more stand-up comedy, it’s easy to forget the prerequisite needs we audience members have in attending a theatrical production. There is no beginning, middle, and end to this story. Instead , there is one man teaching us about how to be human, with ample laughs served throughout. There’s a definite curiosity to know how it will all end, and ultimately the conclusion we are provided seems rushed and falls somewhat short. In addition, the final moments of the piece present us with the show’s weakest jokes, ones that pander to a low level of sophistication otherwise not assumed about the audience.

Director Mindy Cooper has cleverly crafted a piece that relies heavily on the strengths of its lone ranger, Peter Story. Our resident “Martian” commands a stage simply dressed with a couple pieces of furniture, two hanging fixtures, and two television displays on either side of the audience. The televisions are used for the animations provided by Bazillion Pictures, which add an extra layer of comedy—illustrating scientific discoveries narrated by Mars’s real-life author, John Gray.

One thing that needs to be said is that Men are from Mars… is not for younger audiences. It definitely has mass appeal in subject matter, but it’s clear from the beginning that the intended audience is somewhere between thirty and fifty years of age, although those not in that key demographic should still be able to glean several lessons from the piece. And if mom and dad ask for a solid date-night recommendation, I would give Men are from Mars, Women are from Venus Live! a very positive endorsement.

Men are from Mars, Women are from Venus Live! is adapted by Eric Coble from the book by John Gray. Directed by Mindy Cooper. Performed by Peter Story. Produced by Paul Emery and Emery Entertainment. Costumes designed by Tristan Raines. Animation and Video Production by Bazillion Pictures.