To purchase tickets visit signaturetheatre.org or by calling 212.244.7529 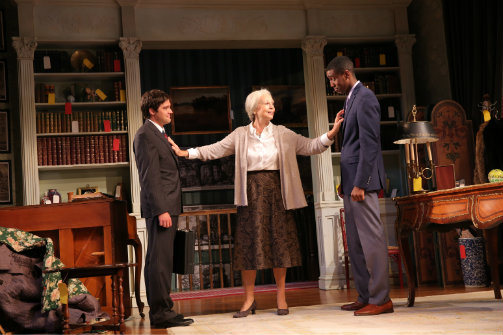 BOTTOM LINE: If you like A.R. Gurney, you will love this WASPY throwback comedy.

“Now let’s remember to listen to what other people say, or at least pretend to listen, and not interrupt if we can possibly help it. And if you see people looking bored or uncomfortable, try to bring them back into the fold. Because it’s my firm belief that if we mind our manners and make a decent effort, and give everyone a chance, we’ll end up having a perfectly marvelous time!”

After watching A.R. Gurney’s Love & Money, these words struck me more as a playwright’s considered plea than a character’s personal philosophy. Gurney, the theatre maestro known for such bygone successes as Sylvia and Love Letters, has always been in his element in society (with a capital “S”). In many of the worlds he has created, politeness is the esprit du temps—much of the drama or comedy is created by people working within (or rebelling against) their strict codes of conduct. Because of this, his plays often seem to be of another era—one in which people of all races, creeds, and colors could solve their differences, or at least perceive to, over tea and coffee in the sitting room. His latest effort, Love & Money, is no exception.

Love & Money is the story of Cornelia Cunningham (Maureen Anderman), a wealthy older white woman with plans to liquidate her estate. She is going to live out her days at a swanky “retirement facility,” complete with bridge tournaments and exercise classes, and has decided to give all of her money and possessions to charity. All of the action takes place in Cornelia’s Manhattan drawing room (beautifully designed by Michael Yeargan), where every painting, book, or antique is tagged for sale or donation. Cornelia is busy taking stock when the doorbell rings, and in walks Harvey Abel (Joe Paulik), a young lawyer sent by his firm to talk some sense into poor old Cornelia. Her decision to donate her fortune, he explains, will undoubtedly be challenged by interested parties—though Cornelia’s son and daughter have passed away, she still has two grandchildren who will want their cut. Complicating matters further, Abel reveals that his office has received a letter from a man named Walker Williams, in which he claims to be Cornelia’s illegitimate third grandson. Surely, Abel presumes, this apparent con man will want his pound of flesh as well.

No sooner has Abel mentioned the letter than that very same Mr. Williams (Gabriel Brown) appears at Cornelia’s home, dressed in a suit and calling her “grandma.” Walker, who is black, explains that his father had an affair with Cornelia’s daughter, and convinced her to have Walker despite her objections. Using his knowledge of F. Scott Fitzgerald and Cole Porter, Walker bonds with Cornelia immediately, dancing with her and begging to know more about his poor, deceased “mother.” When Abel leaves to meet his girlfriend for lunch, Cornelia is inexplicably left with the stranger Walker in the drawing room. They are not alone for long, however, as Asian Juilliard acting student Jessica (Kahyun Kim) soon comes by to see the vintage Wurlitzer player piano that Cornelia is donating to her school. Cornelia’s thirty-year Irish maid Agnes (Pamela Dunlap) then calls the “relations” to lunch, leaving Jessica alone to sing a completely out of place Cole Porter tune. When Cornelia and Walker return, Walker is infatuated with Jessica (why is anybody’s guess), but she must get back to class. After a more frank discussion about money between Cornelia and her “grandson,” Abel reappears with some new information about Walker’s true identity, and the jig is up. Not to worry, however, as the ever-generous white matron Cornelia has decided to give Walker some money after all, in the form of a donation to the Juilliard acting program that will allow him to attend. Just like that, thanks to Cornelia’s exceptional magnanimity, everybody lives happily ever after.

From the start, Gurney is alive in his Gurney-ness. With references to Eastern Airlines and the The Fuller Brush Man, Cornelia is every bit the aging WASP that has typified much of the playwright’s recent work. The issue with this play lies not with her, or with Maureen Anderman’s funny and understated portrayal, but with her relationship to the world of the play. She is surrounded by lesser recipients of her boundless charity: the young white lawyer, stubborn because of his Latvian heritage, to whom she teaches acceptance; the young black conman, nefarious in his intentions and minstrel-like in his behavior, to whom she grants acceptance to Juilliard (so he can better learn to shuck ‘n jive, presumably); the Asian Juilliard actress, lifeless outside of her song, to whom she gives her prized player piano; and the aging Irish maid, stereotypical in every way, to whom she gives the greatest gift of all—an invitation to actually sit down at a dinner party.

There is an audience for this kind of play. At the performance I attended, that audience was overwhelmingly old and white. In conversations overheard afterwards, it was clear the play provoked nostalgia and general enjoyment. There was fond reminiscing over player pianos and Cole Porter. One conversation went like this:

“My grandmother had a player piano.”

“I had a player piano as a child.”

“Do they make those anymore?”

“They make them electronically. My brother has one.”

Indeed, this play is not unlike Cornelia Cunningham’s old analog Wurlitzer. It plays as if somebody took an A.R. Gurney songbook and programmed in #45. The story is ordinary, the characters are stock, and the dialogue is chock full of references to a bygone era. If you’re expecting this piano to hit all the old notes, to play the familiar standards so faithfully that you can sing along, and to sound just like you’ve always remembered, you’ve sat on the right bench.

(Love & Money plays at The Pershing Square Signature Center, 480 West 42nd Street, through October 4th. Performances are Tuesday through Friday at 7:30, Saturday and Sunday at 8, with Wednesday, Saturday, and Sunday matinees at 2. Tickets start at $30 and are available at signaturetheatre.org or by calling 212.244.7529)