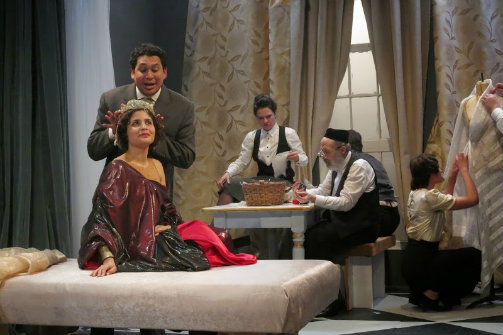 BOTTOM LINE: A history play by a master of modern drama, Kristina touches on many of the playwright's familiar themes.

Swedish writer August Strindberg is best known in the English-speaking world for plays about frustrated women (Miss Julie), dysfunctional relationships (The Dance of Death), and mind games (The Stronger). His 1901 play Kristina incorporates all of those elements. As presented by the August Strindberg Repertory Theatre, it is a sometimes confusing, sometimes fascinating drama.

Based (not entirely faithfully) on the life of a notorious 17th-century Swedish queen, Kristina is an examination of politics and gender roles. The title character is a woman of strong appetites with lovers of both sexes and, apparently, little aptitude for governance. Her advisers are ambivalent about her: one moment they are plotting to get her off the throne, while the next they find themselves overwhelmed by her charm. Men who have been rejected by her are the most keen to undermine her; those who are currently in her favor are eager to reap as many benefits as they can. Ironically, it is when Kristina is at her lowest moment that she shows her most thoughtful, regal aspect.

The action takes place in the 1600s but in this production, directed by Whitney Aronson, costumes and sets evoke the 1920s, and both look great. (The staging is also far more explicit in its depiction of sex than Strindberg could have been in 1901.) The modest space of the aging Gene Frankel Theatre is credibly transformed into various locations within the palace at Stockholm. As the free-spirited queen, Ivette Dumeng captures both the arrogance and the vulnerability of a woman who has a towering responsibility that she might not really want. Other standouts in the cast include Brent Shultz as Kristina’s passionate new lover and Amy Fulgham as her loving mother.

The play, presented in a new translation by Wendy Weckwerth, has some problems. Without a general familiarity with 17th-century European history and a more specific knowledge of the real Kristina’s life, some of the dialogue and plot points would be hard to follow. The production’s emphasis on Kristina’s sexual voraciousness risks getting in the way of the dramatic action. However, the political and personal power plays come thick and fast until the very end, punctuated with the occasional fencing match and quite a few costume changes. Kristina is unlikely to replace Miss Julie on American stages, but it’s a reminder of why Strindberg’s dramas of mind games and sexual frustration are part of the canon.