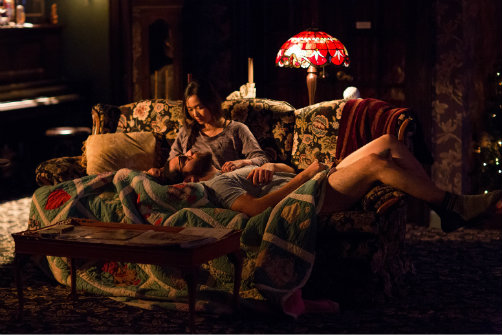 “It's three hours and fifteen.”

“Do you think she'll pull it off?”

Annie Baker’s reputation precedes her in the quiet hum of audience conversation awaiting the opening curtain of John. Fair enough. At three hours and fifteen minutes, the world premiere matches Baker’s Pulitzer-winning The Flick in controversial length. Though, in a generation of the fast-paced and the intermissionless, the length of Baker's plays seems to be a hot-button obsession (during the show's premiere run at Playwrights Horizons, the length of The Flick prompted a public response from artistic director Tim Sanford), Baker’s herculean command of rhythm and pace, and her capacity to manipulate the way we listen and engage with performance, is an intoxicating experience from the first minute to the hundred and ninety fifth.

Mertis Katherine Graven (an unsettlingly wide-eyed Georgia Engel) is the matronly hostess of a grand, but quaint, bed and breakfast in Gettysburg, PA. Here the tragically traditional is so richly manifested in towering displays of tchotchkes and porcelain kitsch (Mimi Lien’s exquisitely rendered scenery), I actually wonder if the smell of Maxwell-House-in-styrofoam wafting from the patron next to me hasn’t been specifically requested by precision-savant director Sam Gold. Long moments of shuffling and strained stair climbing take Mertis (Kitty to her friends) to the porch door to welcome her guests Elias and Jenny, a young couple en route from Ohio to New York, played with electrifying simplicity by Christopher Abbott and Hong Chau.

Elias lugs an overstuffed duffel over his shoulder, bursting with the baggage of a Thanksgiving vacation and a tense relationship. The awkward politesse aroused by occupying a stranger’s home collides with Jenny and Elias’ too-recent relationship wounds, and the stunted exchanges between host and guests slowly mature into melancholy introspection. As the throng of miniatures and figurines glow upstage in arresting stillness, Kitty asks her guests with unusualness, but without threat, “did you ever feel watched?…A greater…a larger presence watching you from somewhere.” Her question strikes chillingly at a universal sense of unnamable omniscience, of responsibility and guilt, and though her bizarre aloofness lends a tone of wry, surprising levity to the play, a dull pang of dread forebodes persistently beneath the surface.

In the midst of the repartee, a fourth character emerges, perhaps even as if incarnated herself by some unknown watcher. Genevieve is Kitty’s dearest friend, an 85-year-old blind woman with her own prickly relationship saga and a history of vivid mental illness. She is played with galvanizing frankness by Lois Smith, and figures so elegantly into the fabric of the play that it seems a disservice to reveal more than cursory details. Suffice it to say she is the glue of the production, a kind of guide through Baker’s many breadcrumb trails, lurking, unmoving in the background of the narrative like Kitty’s thousand knickknacks.

That the evening ends in a moment of disarming intimacy and shattering awkwardness will be no surprise to followers of Baker’s work, but the effect is no less transcendent. Late in the play, Kitty describes meeting her second husband: “it was what it would be like if you cut me open and showed me my heart or liver for the first time." John leaves its audience with a similar sensation, as Baker, astonishing us with the familiar, achieves the formidable task of revealing ourselves to ourselves.