In The Soundless Awe 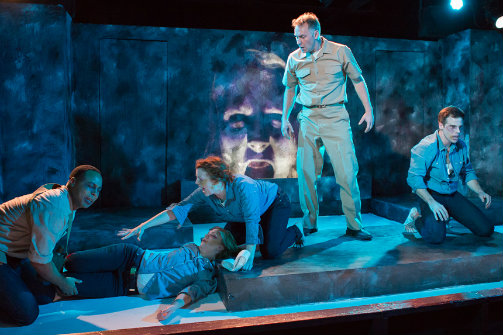 A country's history is made up of its successes and its failures. The former, usually kept in people's minds and hearts for longer than the latter, serves as fodder for the construction of national identity and helps place a nation in the global historical picture, allowing for political leverage. The latter, if at all, is strategically brought up to humble the nation and give its people a sense of vulnerability, hanging over their heads as a constant cloud of shame. What would happen though if said cloud were to be dissipated, allowing the sun to shine again on the subjects of said failure? This is a question answered by In The Soundless Awe.

Here, what is known to be one of the most tragic chapters in U.S. Naval history—the sinking of the U.S.S. Indianapolis during WWII by two Japanese torpedoes after the ship was lead into apparently safe waters by Captain Charles Butler McVay III—has its final moments reimagined under a very theatrical and emotional light. With a successful marriage of lyricism with a symbolic and effective use of lighting designed by Michael O'Connor, illustrative sound design by Andy Evan Cohen, and haunting video design by Yuriy Pavlish and Zach Griffin. In The Soundless Awe questions the martial logic under which McVay was tried presenting it as unjust, cold, and quasi-illogical (a point made by the use of the testimonial of the Japanese official who fired the torpedoes that brought the ship down to corroborate the case against Captain McVay's innocence).

The play is structured like an intricate back and forth between solitary moments of Captain McVay at a desk responding to letters, the accident itself, the five days that followed until the remaining survivors were rescued, and memories of the Captain's life that punctuate the narrative, sometimes coming across as sentimental and sometimes poetic. The ensemble, including Amanda Berry, Gregory James Cohan, Eric Cotty, Bethany Geraghty, Brandon Jones and Janae Mitchell, is cohesive in its performance and powerful although not without its unbalanced moments, noticeable in the shipwreck scenes when the energy of the circumstances didn't feel fully realized. They're nonetheless responsible for most of the play's success and poignancy

McVay is played by Leo Farley in his past moments and by Chris Kipiniak in the present. Farley anoints the character with an infant-like innocence, delivering a believable performance of a man who has complete faith in his duty and love for his country. Kipiniak, though only appearing at the very beginning and the very end of the play, embodies with precision the figure of a man haunted by life and clings to the belief in his choices in the hopes they'll appease the shame of their consequences.

Hallie Wage appears as the Gray Lady, personifying at times McVay's nightmares, at times the judge in his dreams and at times a sea messenger for death and darkness. Wage moves smoothly and adds charm and mystery to the face of doom.

The show ends on a high note, with a patriotic homage to Captain Charles McVay III as the ensemble salutes the heavily condemned historical figure while marching to Sigur Ros's melancholic and touching "Glósóli" to black and white images of the real survivors and the real Captain projected on the background. While I—a foreigner with very specific opinions about the U.S. military procedures and approach to world politics—wasn't particularly moved by the salutation ritual, I can understand why others might leave the theatre feeling gratitude to this talented group of sensitive artists.

In The Soundless Awe also appears at a crucial moment in the world's history and questions, albeit lightly, the logic behind war, patriotism and the double standard of a country that values their youth before the war and then turns its back on them after they've served. Definitely a discussion that needs to happen.

(In The Soundless Awe plays at Access Theater, 380 Broadway, through December 12, 2015. The show runs 75 minutes with no intermission. Performances are Wednesdays through Saturdays at 8. Tickets are $15-$18 and are available at newlighttheaterproject.com.)