In a Tilted Place 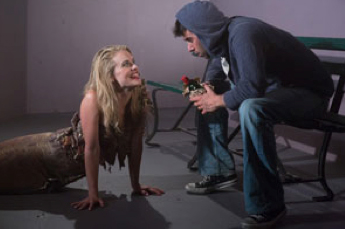 In a Tilted Place.

BOTTOM LINE: In a Tilted Place brings us into a surreal, darkly humorous world between the big dreams we have in New York City and the nightmares that drove us there in the first place

In a Tilted Place is built on 9 short plays. One could consider this a “kaleidoscope of a play,” as the website declares, and the evening does indeed have a curated feel, although I would just as easily believe that the playwright Tony Deutch was cleaning out his 10 minute play closet. In the hands of a lesser writer that could be disastrous, but Deutsch has a strong voice that moves with a lurching determination from comedy to yearning to cruelty to surreal antics.

The evening’s opening piece, Bright-Eyed and Bushy-Tailed, offers a believable set-up, but soon wrenches the audience into another realm. Actress Cassandra Stokes-Wylie—sitting up in bed, boyfriend still asleep—tells us about her dream of moving from a small town to a big town. Soon the dream becomes a nightmare that seems to have stalked her all the way to New York, a sexual predator wearing the transformed body of her boyfriend.

The second piece, Chanel Chance, begins with another seemingly everyday moment: a woman in a cafe, reading The Goldfinch, trying to catch the eye of a man. The woman (Kelsie Jepsen), is written as a hysterical and spoiled child who moved to a city she wasn’t prepared to handle. Played with disturbing intensity, the woman seems to have only one dimension. The man (Ronald Peet) remains calm, and controlling and responds to the woman’s hysteria with disturbing revelations about her family — but the more cruel he becomes, the more she declares her love for him.

That is often how it is in In a Tilted Place. While the gap between light dreams and dark dreams, and between what we want and what we get form the play’s rich, thematic underbelly, its depiction of men and women often seems simplistic, and even stereotypical. It is in these scenes between romantic partners that it becomes difficult to believe in the intense reality being conjured up by the text.

Directors Ashley Brooke Monroe and Courtney Ulrich work their way through the text with dexterity, leaping from fantastical moments to frank confessions, to near slapstick, without missing a beat. Each piece seems both distinct and part of a greater whole, filled with yearning, energy, and specificity.

The ensemble cast is splendid, with a few standouts. In the third piece, Call Me Daryl Hannah, Rachel Moulton plays a mermaid who has ripped her scales raw crawling onto The Highline to declare her devotion to Michael Kingsbaker, playing a depressive alchoholic, uncapable of love. Moulton brings a welcome irony to her performance, playing against the darkness present even in the most comic moments of the play.

Another standout is Sean Kazarian, who we first see in Glowing Dinoflagellates. Two pieces later, Kazarian returns to give an unforgettable performance in The Rockefeller Center Play. The powerful, aching vulnerability of Kazarian’s soliloquy is the heart of the evening, and it really holds In a Tilted Place together.

Pamela Shaw, playing a psychic with her own agenda, brings a world-altering revelation to Jepsen’s character, giving her a refreshing moment of humanity that the character desperately needed.

The penultimate piece, Brown Fish, had the benefit of both Moulton and Kazarian. Moulton, bouyed by a desperate comic energy, plays a woman who discovers her roommate is making a log cabin out of poop. Her straightman is Kazarian, with his “calming energy.” Together with Deutch’s sly, funny text and deceptively simple direction from directors Monroe and Ulrich, Moulton and Kazarian move from scatalogical sketch-comedy to a complicated metaphor about what it takes to hold to one’s dreams in a city that sometimes seems to revel in crushing them.

At its best moments, In a Tilted Place uses humor and dark surrealism to bring revelations about to the gap between the dreams we reach for in New York and the nightmares that drove us here. The directors are diligent and the cast is game; In a Tilted Place is a piece whose riches prove elusive, but whose exploration of the real moments of New York ring true.

(In a Tilted Place plays at IRT Theatre, 154 Christopher Street, 3rd Street, through August 30, 2015. For tickets and information visit irttheater.org.)