By Margaret Dulaney; Directed by John Augustine
Produced by On Your Way Home Productions 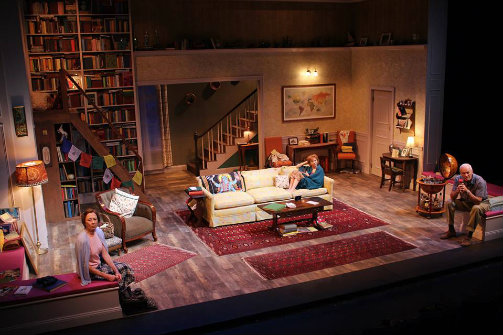 BOTTOM LINE: A sweet comedy about life and death, and what happens when we allow them to prematurely collide.

Death, Benjamin Franklin once wrote, is one of life’s few certainties. Yet for something so commonplace, it often remains shrouded in mystery. When will it come? How will it come? Should we ever know the answers to these questions? This final query is the central conflict of The Hummingbird’s Tour, Margaret Dulaney’s comedic meditation on life and death—and their endlessly complicated relationship.

The Hummingbird’s Tour begins with the nomadic Lucy (Anne O’Sullivan) returning to her childhood home to visit her siblings (Ray Baker and Susan Pellegrino), and their elderly nanny (Lynda Gravatt), following her latest quest to discover life’s true meaning. Things turn complicated, however, when she introduces them all to a friend who promises he can provide them each with the exact date their lives will end. What follows is a series of discussions about the very nature of life and death, and whether it’s possible to consider one without concern for the other.

Originally written 20 years ago, this production marks Hummingbird’s New York debut, following two successful productions at the Bucks County Playhouse in 2013 and 2014. While the script isn’t entirely forgiving of its age—much of its dialogue feels rather creaky, and many of its discussions never reach their full existential potential—it does manage to inject what could be a rather stuffy premise with a hearty dose of humor. Its comedic aspects are heightened by director John Augustine, with blocking that is delightfully zany, and by its cast, most notably Pellegrino, whose portrayal of youngest sibling Mattie is equal parts earnest and wacky.

Perhaps even more impressive than the production’s comedic impulses, however, is its design. Sheryl Liu’s scenery includes towering bookshelves and an eclectic collection of furniture entirely suitable to its owners, and is breathtakingly decorated with tchotchkes galore. Christopher Weston’s lighting is wonderfully moody and mystical, and the costumes, by Christopher Leidenfrost and Brian Strachan, are thoughtful, colorful extensions of their characters.

Though it may not be remembered as the most provocative or the most inventive piece of theatre out there, The Hummingbird’s Tour is an entertaining diversion, and a sweet reminder of the importance of embracing life’s full potential.

(The Hummingbird’s Tour plays at Theatre at St. Clement’s, 423 West 46th Street, through November 22, 2015. Performances are Mondays, Wednesdays, Thursdays and Fridays at 7, Saturdays at 3 and 7, and Sundays at 3PM. Tickets are $59-$99 and are available at hummingbirdoffbroadway.com.)