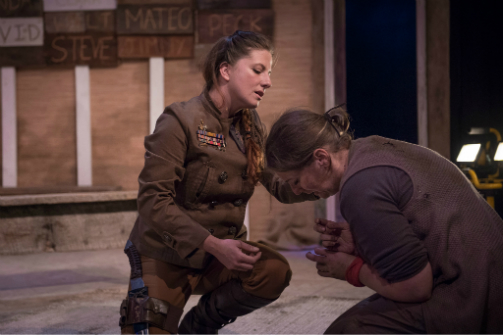 Hanna Cheek and Erin Jerozal in Sovereign, Part III of The Honeycomb Trilogy.

Back after their sensational 2012 run, Gideon Productions has remounted The Honeycomb Trilogy by Mac Rogers in its entirety once again! Holy end-of-days nerd-vana, Bat-Man, this epic serial has everything I love: astronauts, the apocalypse, alien invasions, body-snatching, halberd jousts, and verbal sibling pissings. I know I’m late to the party and that Gideon Productions has been seriously killing it for a bit; their cult-followers were present and strong in the audience on opening weekend. They wept openly at times while roaring with laughter during the lighter moments. As a new initiate to GP I think I conducted myself admirably by doing The Marathon. Oh yeah, I indulged, and I truly believe it’s the way to do it. You can catch each installment of the trilogy—Advance Man, Blast Radius and Sovereign—Tuesdays, Thursdays and Fridays, with a rotating schedule, or you can do the whole sci-fi mini-series, like me, in one shot on any Saturday or Sunday throughout The Honeycomb Trilogy’s colossal run. Mac Rogers's darkly-comic, heart-shredding dramatic odyssey probes the timeless questions about the fate of mankind, and I recommend taking it all in in one gulp.

The opening gambit of the trilogy, Advance Man, is set in present day Coral Gables, Florida, in the Cooke family household, an “upper middle class American home of the early 21st century.” We’re introduced to Amelia Cooke (played with piercing warmth by Kristen Vaughan), a stay at home mother who is hiring a private eye to spy on her husband whom she suspects of having an affair. Her husband, Bill keeps coming home late with barely an explanation. Played with unshakable charm and smoky coolness by Sean Williams, Captain Cooke is the kind of guy you’d want in charge of your missions: calm, but as quick with his mind as he is with his fists. After a 3-year mission to Mars on an assignment to establish a timeline for how quickly the human race could begin to colonize the planet, Bill returned and quit the NASA program. The strategists at NASA gave Bill and his crew an actual deadline, but while on Mars they discovered something—or rather, someone—unexpected. Yes, Mr. Bowie, there is life on Mars…but it kind of crash landed there. Are Bill and friends really going to save our planet?
Advance Man sets up a crucial philosophical conflict between Ronnie (Becky Byers) and her brother Abbie (David Rosenblatt). “He’s so helpless it makes all the other kids want to hurt him,” Ronnie scowls with a sigh after having beat up Abbie’s bully. Abbie, played with supple angst and longing by Rosenblatt, despises his body and high school; he longs for some way to break out of his existence. Meyers is a smirking scene stealer, and her Ronnie has her feet planted firmly, ready to knuckle sandwich her way through any confrontation. Despite the siblings' binding love they represent two fundamentally opposing forces of human nature.
Hold on to your dystopian diapers, because the next time we’re back at the Cookes’ it’s 12 years in the future. In Blast Radius, the world has drastically changed. Humans have been overrun by insectoid “bug” creatures known collectively as Honeycomb who have taken away our technologies and our means of self-annihilation. Instead they have provided us with a simpler existence of harvesting fields for the further advancement of their hives. The new rallying cry of every human house is “we need every baby,” or else the human race is destined to be extinguished for good. On the one hand, there are no more stock markets, foreign wars or food shortages to worry about; on the other, our entire civilization has been overrun and we are subjugating to an existence of servitude.
Still, Rogers has us ponder if maybe the bugs are doing us a favor. If left to our own devices we self-destruct, then a simple life of back breaking manual labor might be our salvation. Abbie certainly thinks so! He’s back, this time as a pro-Honeycomb ambassador between the hive and the humans. The Honeycomb live in a beauteous psychological and physical harmony, each hive member living out their days by the moto, “what have I done with my little life to make the Honeycomb better?” This is Abbie’s ideal. On the other end of the spectrum is Ronnie, who finds herself a reluctant leader of a human rebellion. By the time we jump to the second half of Blast Radius, Ronnie is oh-so-close to rounding up just the right amount of soldiers of fortune who might be able to accomplish the epic task. “The 51st,” as they would be immortalized for millennia to come, may become martyrs at the dawn of a new era of mankind.
In the span of three plays, we travel 20 years into our future as the final chapter, Sovereign, launches us another 8 years ahead. Here the children of the insectoid war are all grown up, tempered and proven by the fires of a nearly decade-long war. Sovereign shifts gears and focuses on Government. The Coral Gables settlement, finally bug free, is led by—who else?—Governor Ronnie Cooke. Now in her mid 30s, Governor Cooke is embodied by the mercurial Hanna Cheek playing the part with all the ferocity of an arctic hurricane. Ruling straight from the Cooke roost, this wiser, nastier Governor Ronnie has no patience for anyone who still conducts themselves as if under bug reign—that is, without dignity. We witness her dole out a severe lashing and prison sentence on a farmer who allegedly used parts of his deceased wife to make new farming equipment. Cool as frostbite, the Governor scolds the farmer “When someone dies, the town comes out… everyone who remembers her says something, and we put her in the ground together. Because we’re not fucking parts.”
Before her day is done, Governor Ronnie has a surprise visit from the most hated and most wanted war criminal, her little brother Abbie. Stephen Heskett rediscovers the role with calculating malice; this older Abbie is fiercer and more stalwart than ever. Played as a teeth-barred court-room drama, Abbie is tried for the crime of attempted genocide and in his remarks he challenges us to consider what we humans are: weak, selfish, with very little to contribute or to share with the rest. Spitting, Abbie describes the privileged western world of his childhood succinctly, “Go die somewhere else so I don’t have to see it.” The bugs offered a way to become more than what people were, to allow the smallest effort contributed to the whole to make a difference, and to be enough to create happiness.

The ensemble cast is a joy to watch and director Jordana Williams is nothing short of an absolute bad ass. Williams and her production team’s achievements with the trilogy are simply remarkable, creating a style and a sense of action that is a genre onto itself. Rogers’ words, under her determined direction, exist as prophesies, heresies, jibs and prods, bursting with life in every moment. Rogers has accomplished a wholly unstoppable and supremely watchable epic. I wish I could Netflix Mac Rogers.

The gorgeous sets, by Sandy Yaklin (who pulls some serious weight also being the production’s technical director and props master) capitalizes on the mutability and timelessness of a family house, creating a sense of myth around the Cooke homestead. Jennifer Wilcox’s effortless lighting design is seemingly subdued and naturalistic, until it becomes a gorgeously ribald sign of inevitable destructions. I was magnetized by Jeanne Travis’s haunting sound design, between the hyper-realistic effects of gigantic bugs and bonfires burning right outside the Cooke home, to the house music laden with hints of how music will be transforming in this new world. The costumes are equally awesome: sweat-stained, dirt smudged survivors, hooded bug hunters, snarling pregnant mothers, and a medal-pinned Governor, all stitched into being by the deft hands and clear eyes of Jenks.

Since seeing the show, one question has been stuck in my mind...if the human race had to restart from scratch, who would I want to spend the rest of all civilization with? Grab that special end-of-the-word someone and make it a date night at The Honeycomb Trilogy. See it before the apocalypse comes—or before their run is over, whichever happens first.

The Honeycomb Trilogy is written by Mac Rogers and directed by Jordana Williams. It is produced by Gideon Productions. Set design is by Sandy Yaklin. Costume design is by Amanda Jenks. Lighting design is by Jennifer Wilcox. Sound design is by Jeanne Travis.