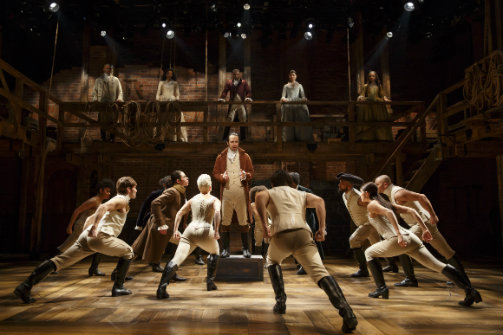 The first thing to know about Hamilton is that it’s unlike any show you’ve ever seen. That’s just one of many reasons to catch it at your earliest opportunity (although be warned that it’s going for Broadway-level prices, and tickets are extremely hard to come by, so you might choose to wait until July when it moves to Broadway).

The production’s author and star, Lin-Manuel Miranda, proved seven years ago, with the Tony Award-winning In the Heights, that it was possible to create a commercially successful hip-hop musical with a traditional book narrative. Now, after several years of relatively safe projects—the slick musical comedy  Bring It On and new lyrics for revivals of West Side Story and Working—he’s decided, of all things, to create a new rap piece about Alexander Hamilton.

A conventional approach to such an unconventional idea would have been to primarily focus on one aspect of the story of that founding father—his romances, his struggle to create a new centralized government, or, more likely, his famously tragic throwdown with Aaron Burr. But Miranda isn’t satisfied with standard tragic structure. He’s going all-out epic theater, with a two-and-a-half-hour production that tackles all of those angles of Hamilton’s life in equal measure. It’s a dizzyingly ambitious work. And, although it goes too far in fudging an important historic detail or two—ironing out the sheer horrors of violent rebellions, over-simplifying complex individuals like James Madison, and shifting the chronology of one character’s death to make false connections to other events—it gets enough right in the broad canvas of Hamilton’s story to stir up interest in these legendary figures and to get modern audiences to argue about them. Which is what good epic theater should do. How many people had, before this, even heard of Hercules Mulligan, a mysteriously overlooked Revolutionary compatriot played here by Okieriete Onaodowan (who doubles as Madison)? Hamilton is all about personal narratives: who gets to create them, and who gets to be remembered.

And the elements of Hamilton that are purposefully “inaccurate,” particularly the extremely nontraditional casting of this young, mixed-race company, provide a wonderful underlying theme to this show: America’s past passionately embraced and claimed by its future.

Miranda and his director, Thomas Kail, achieve all this with a crack creative team and a robust group of performers. This is one of those shows that should just get a single, all-encompassing award for its designers. Howell Binkley’s lighting is deeply expressive, even witty at times. A diadem of white spotlights surround a blood-red wash for an appearance by King George III (a sharp and endearing cameo by Brian d’Arcy James). A hurricane’s vortex of shadow and light sweeps around the floor during a turbulent scene for Miranda’s Hamilton. The always phenomenal David Korins creates a Brechtian-inspired unit set of wooden staircases, walkways, and a revolving platform. Paul Tazewell’s delicious costumes manage to be exceedingly sexy and, at the same time, detailed with fine, historic accuracy. And Nevin Steinberg’s sound design not only accentuates the driving rhythms of Miranda’s score, it brings out the crisp diction and beautiful blend of everyone in the cast.

Kail is one of several creative masters reunited here from the original production of In the Heights. As for other Heights alumni, look for the often-electric choreography of Andy Blankenbuehler, the powerful actor Christopher Jackson as George Washington, and the stunning ensemble dancer Seth Stewart.

All 19 performers are excellent. But I would be remiss in not also singling out Leslie Odom Jr. and Phillipa Soo, who bring an effective intensity to Aaron Burr and Eliza Hamilton. And the most sizzling rappers in the company are Broadway veteran Renée Elise Goldsberry (who knew?) and the mesmerizing actor/hip-hop artist Daveed Diggs, who play, respectively, Eliza’s beloved sister, and a hilariously sassy Thomas Jefferson. Discovering Diggs, who also plays a whimsical version of the Marquis de Lafayette, is another good reason to check out Hamilton. Someone needs to write the next rap musical around his explosive talent.