By Thomas Kilroy; Adapted from the play "Ghosts" by Henrik Ibsen
Directed by Austin Pendleton
Produced by the cell in association with The Furies 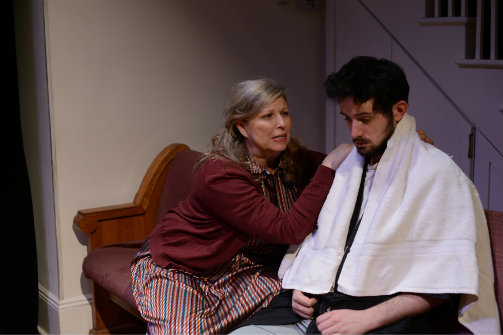 Debra Lass and Keegan McDonald in Ghosts After Ibsen. Photo courtesy of The Furies.

Norwegian playwright Henrik Ibsen was never one to write a light romp. During the 19th century, he offended the sensibilities of 19th century Norway with plays that depicted gender inequality, marital discontent, and so-called “moral indecency.” His plays A Doll’s House, An Enemy of the People, and John Gabriel Borkman have all had successful New York revivals the last few years. The cell, in association with The Furies, is currently presenting an updated adaptation of Ibsen’s 1881 play Ghosts, which was called “foul,” “filthy,” and “lugubrious” by Victorian-era critics -- and those are some of their nicer adjectives!

Here, playwright Thomas Kilroy has freely adapted Ibsen’s play and renamed it Ghosts After Ibsen, setting it in the mid-1980s, an entire century after Ibsen first wrote the play. Helen Aylward (Debra Lass), widow of Martin Aylward (frequently mentioned, never seen), is almost ready to open a women and children’s shelter bearing her husband’s name (in Ibsen’s original play it was an orphanage). Her son Oliver (Keegan McDonald) has recently come home from abroad, but is mysteriously ill. He later reveals that he has been diagnosed HIV positive (in the original it was syphilis, which he inherited from his father). Meanwhile, the Catholic priest Father Manning (Joseph Stillman) arrives seemingly to finalize details about the shelter, but has actually come to chastise Helen about her appalling behavior during her marriage -- in the first year of her marriage to Martin, she discovered that her husband was a philanderer, and briefly ran away. In later years, she also sent their son away so that he wouldn’t have to live with his father’s sexual exploits. She hopes that the women and children’s shelter will deplete her husband’s wealth so that Oliver won’t receive any inheritance from his father.

The past, missed opportunities, and regrets come back to haunt her in what she describes as “ghosts.” The “ghost” in this house is the memory of Martin, whose sexual exploits still carry ramifications among his family. Helen also describes ghosts as “dead ghostly teachings,” moral lessons and codes from the past that prevented the characters from being truly happy. For the most part, Kilroy’s adaptation is very faithful. While he’s managed to make a bleak play even bleaker, he expanded upon Ibsen’s original script to make the themes resonate stronger.

Director Austin Pendleton makes excellent use of the small space. We feel like flies on the wall of the play’s proceedings. The intimate effect is well achieved by the actors, as well, although they could all afford to project a little more. Even in the small space, it was difficult to hear them. Debra Lass is very strong as Helen, by turns maternal, desperate, warm, and vengeful. Joseph Stillman is perfectly pious as Father Manning, but also shows the more human side of his character. The two of them share the play’s strongest scene, and their exchanges are tinged with the right amount of regret and sorrow. Keegan McDonald’s Oliver grows more antsy and fidgety throughout the play, a convincing portrait of a man deteriorating.

Those looking for a light and bouncy evening are advised to look elsewhere. This is a heavy, I repeat heavy production, even for a playwright as serious as Ibsen. There are no moments of laughter, and joy is minimal. Personally, I think more of an attempt to find the humor in the text would’ve lightened up the proceedings to its benefit. A good portion of the play is also expositional, which renders it rather loquacious. However, the production is so powerfully acted and well directed that the emotion under the talk is palpable throughout. While not always a pleasant sensation, it results in an empathetic and moving climax that will haunt you (no pun intended) for days. As a fan of Ibsen, it was fascinating to watch his themes play out and even expand in a different setting. For those who aren’t acquainted with Ibsen’s work, this would be a good first exposure, but be advised: You will not exactly leave the theatre in a happy-go-lucky mood.