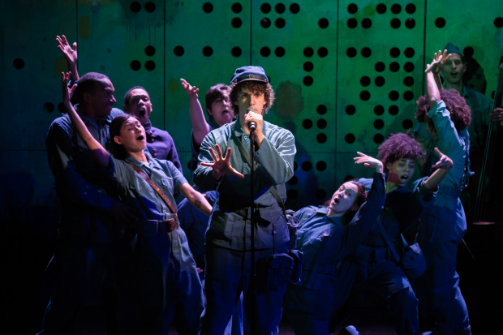 César Alvarez and the cast of Futurity. Photo by Ben Arons.

The Civil War comes alive in Futurity, a new musical by (and starring) The Lisps. Starting the evening in front of the curtain, the band says hi and plays a song. The fourth wall is immediately broken and an intimate concert environment is created. What follows is a conceptual performance piece, detailing the fictional relationship between Ada Lovelace (Sammy Tunis), daughter of Lord Byron, and a Union soldier named Julian Munro (César Alvarez). Ada is a mathematician fascinated by space and time (based on the real person of the same name). Julian (a fictional person) is a big fan of her work. He sends Ada fan mail and is giddy to receive a reply. Their correspondence via letters is chronicled throughout Futurity; their relationship grows despite the ocean between them.

Maybe the most remarkable part of this production is the strikingly talented 13-person ensemble, playing instruments throughout the show. The instruments exist in hand, and instead of weapons, these "soldiers" go into battle armed with music. Through Sarah Bensons tight direction, they create the world with an orchestral energy. And they sound incredible. Matt Tierney's sound design is nothing short of amazing.

Futurity is an experimental musical and although it does break innovative ground in its staging, it harkens pretty directly to Brecht's epic theatre. There is a pulsing earnestness from the ensemble and the piece is incredibly self-aware (to the point where Tunis and Alvarez make small talk like bandmates between songs, chatting about current events and whatever comes to mind). Despite its playfulness, Futurity has a lot to say about the state of war and the lack of progress we've made in equality. A particularly poignant moment happens when the general (Karen Kandel), a black woman, speaks of the need to end slavery. It feels uncomfortably contemporary, even though she presumably lectures to a 19th century following. Large philosophical concepts regarding time/space and war/peace come up throughout the show. Futurity doesn't put too fine a point on its musings, but rather scratches the surface to expose these broad concepts.

Futurity is successful in its endeavors to transport the audience to a unique time and place. With dramaturg Jackie Sibbles Drury, and Molly Rice, credited as providing extra text, the story is defined and impassioned. There is a tightness to the production's energy and nothing feels superfluous or indulgent. Benson does tight work calibrating the evening. The music is infectious and at times even transcendent; it takes center stage and the show becomes as much a concert as a musical.

One of the most exciting components of Futurity is how democratic it feels, like it was created by the people, for the people. Despite its lofty ambitions, it never talks down to its audience. The artistry throughout his unique work is always present, creating an engaging event that is a delight to experience, especially if it can be enjoyed as a concert (if you go in expecting a book musical you might be disappointed, or rather, confused). Teetering on the edges of performance art, the inherent weirdness in the piece makes it both exciting and a little alienating for those expecting a familiar musical theatre format. But for those looking for innovation, there is much to appreciate from The Lisps and this incredibly talented team.